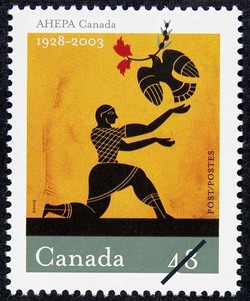 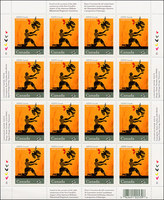 Seventy-five years ago, the American Hellenic Educational Progressive Association (AHEPA) opened its first chapter in Canada to help immigrants settle comfortably in their new country without sacrificing their Hellenic identity and heritage. Canada Post commemorates this occasion with a single domestic rate ($0.48) stamp, available to collectors in a pane of 16.

History of the AHEPA
AHEPA was founded in 1922 in Atlanta, Georgia to protect Hellenes from bigotry and help them adjust to life in American society. In 1928, the first chapter of AHEPA Canada was organized in Toronto. One year later, the second chapter opened in London, Ontario, and a chapter was established in Montreal in 1930.

Affiliated Organizations
To complement the AHEPA and to keep young North-American Greeks together and in touch with Greek culture, three affiliated organizations were created: the Sons of Pericles (young men's group), the Maids of Athena (young women's group), and the Daughters of Penelope (women's auxiliary). The Sons was formed in the United States in 1926, and by 1928 was officially recognized as the Junior Order of AHEPA. This group expanded into Montreal in 1932. The Maids of Athena, a Junior Order of the AHEPA, was founded in the United States in 1930, as an international fraternal organization of young women of Hellenic descent. The Maids' first Canadian chapter was opened in Vancouver in 1937. Conceived as a preparatory step towards membership in the Daughters of Penelope, the Maids of Athena strives to build spiritual, intellectual and social character.

AHEPA Today
With approximately 450 chapters around the world, AHEPA is the largest Greek-American organization. There are approximately 300 active chapters in the United States and 14 in Canada. Total membership is estimated at 20,000 in the United States, with approximately 1,500 members in Canadian chapters. The main objectives of AHEPA Canada are to promote a mutual understanding of Greek and Canadian cultures and to encourage members to participate in the civic and philanthropic activities of their communities and their country. Activities and fellowship are provided through recreational, sporting and social groups. The AHEPA Educational Foundation offers scholarships to a wide variety of students, while the AHEPA Family in Canada is very active in raising funds for charitable organizations at the local, national and international levels.