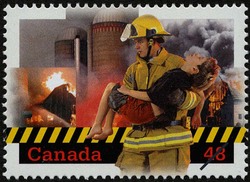 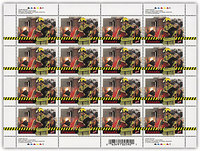 Volunteer firefighters have long been an invaluable part of emergency response to domestic threats involving fire, medical emergencies, hazardous materials, motor vehicle accidents, and rescues across Canada. Although the ranks of volunteer departments have declined, nearly 3,500 of the 4,000 fire departments in our country depend on volunteer services. Canada Post salutes these firefighters with the issue of a single domestic rate ($0.48) stamp, available in a pane of 16.

Volunteer and Career Firefighters
Volunteer firefighters are well trained and are capable of handling fires in high-rise buildings, shopping malls and major industries. Eighty-five per cent of Canada's firefighters are volunteers, protecting 80% of our communities. In Ontario, volunteers outnumber career firefighters - those employed full-time in this line of work - by almost two to one (17,648 to 9,997); and in Newfoundland the number is 5,800 to 2. In Nova Scotia, it's 8,400 to 600, while in British Columbia it's 10,000 to 3,500.

Fires and Firefighting
The first recorded fire in Canada happened in Quebec in 1629. Another, in 1650, burned Quebec's first monastery. Almost every major city has had a 'great fire.' In 1682, a fire in Quebec destroyed two-thirds of the business area; in 1837, a fire in Saint John left 108 buildings destroyed; in 1900, a fire levelled 3,000 buildings in Ottawa and left 15,000 homeless; and in 1904, Toronto lost 86 buildings to a blaze.

The ancient Romans created the first fire department, which at one point had 7,000 members. The first recorded firefighters' organization in Canada was in Montreal in 1734 when ladders, buckets, axes and other tools were distributed throughout the city with designated tradesmen appointed to squads. An 1817 Toronto statute gave magistrates authority to enforce the compulsory firefighting service of all males between the ages of 16 and 60. Toronto established a volunteer fire company in 1826 and established a hook and ladder company in 1831.

When steam engines and hydrant water supply systems came into use, firefighting became less manpower intensive. Subsequently, there was a shift from volunteers to an on-call force that was paid for each response. Volunteers disappeared from Canada's major cities by the end of the 20th century but remain active in small towns and rural areas.

Based on a photograph by Guy Lavigueur.