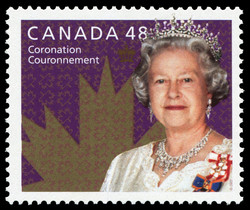 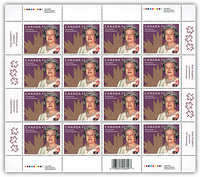 Queen Elizabeth II on stamps
Our Queen first graced a Canadian stamp in 1935 as a very young princess. Her next appearance was in 1939, along with her sister, Princess Margaret, on a set commemorating her parents' Royal Visit to Canada. In 1948, a stamp was issued to honour Princess Elizabeth's 1947 marriage to Philip Mountbatten, and in 1951, a stamp marked the couple's Royal Visit. Queen Elizabeth II appeared as our Queen on stamps issued on the eve of, and shortly after, her June 2, 1953 coronation. All of these stamps are displayed on the back of the Coronation OFDC. During the intervening 50 years, many 'Queen' stamps have been issued by Canada Post; the most recent being the January 2, 2002 commemorative marking Queen Elizabeth II's Golden Jubilee.

Royal titles
In the United Kingdom, Queen Elizabeth II's official title is: Elizabeth the Second, by the Grace of God, of the United Kingdom of Great Britain and Northern Ireland and Her other Realms and Territories Queen, Head of the Commonwealth, Defender of the Faith.

In Canada, Her Majesty's official title is: Elizabeth the Second, by the Grace of God, of the United Kingdom, Canada and Her other Realms and Territories Queen, Head of the Commonwealth, Defender of the Faith.

Royal visits to Canada
Queen Elizabeth II has visited Canada on a number of occasions and for various reasons. Her first visit as Queen was in 1957 to Ottawa and Hull to open the first session of the 23rd Parliament, and her most recent was in 2002 to Nunavut, British Columbia, Manitoba, Ontario, New Brunswick and the National Capital Region for her Golden Jubilee.

About the stamp's design
Featuring a large maple leaf, a smaller leaf pattern and a portrait of Queen Elizabeth II, the Coronation stamp is very similar in design to the 2002 Golden Jubilee stamp. Designer Saskia van Kampen of Gottschalk + Ash chose a background of metallic purple for the Coronation stamp, as purple is the colour of nobility. Says van Kampen: "The leaf pattern on the background is of a slightly lighter metallic purple. The subtle tonal difference changes depending on the angle of light." A simplified version of the small gold crown in the Arms of Canada is a unique graphic element of this stamp.