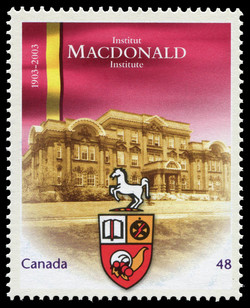 The hidden date for this stamp can be found on the building. Macdonald Institute (Mac), established 100 years ago to educate women from rural society, is one of the University of Guelph's three founding colleges along with the Ontario Agricultural College (OAC) and the Ontario Veterinary College. According to the University, the 23,000 graduates of Mac "have been involved with the World Health Organization, the Food and Agriculture Organization, and countless other national and international organizations focusing on the well-being of the family." Canada Post honours Macdonald Institute's centennial with the issue of a single domestic rate ($0.48) stamp, available in a booklet of eight.

Establishment
With start-up funding from Sir William Macdonald of Montreal, Macdonald Institute was established in 1903 to educate rural women in the 'best practices' of laundry, sewing, cooking, household cleaning and home nursing. The three-month diploma course was dubbed the 'diamond ring' course, as many of the students became engaged to young farmers attending the OAC. Other programs included a domestic science teacher-training course and two housekeeping programs designed to train managers and matrons of residential institutions and care facilities.

Sir William Christopher Macdonald (1831-1917)
Undoubtedly the greatest educational philanthropist of his generation, Sir William Christopher Macdonald was born in Prince Edward Island. He lived in Montreal and was a benefactor of McGill University. For many years, he was also its chancellor. Macdonald financed many elementary school innovations, founded and endowed Macdonald College at Ste-Anne-de-Bellevue in Quebec, and contributed greatly to the OAC and Mac.

The Evolution of Macdonald Institute
Closed during the Second World War, Mac reopened in 1946 and soon began offering a four-year degree program. By the 1950s, it was the largest school of home economics in Canada. In 1964, the Ontario Government created the University of Guelph with Mac as one of its elements. Courses such as sewing and cooking were eventually replaced with courses focusing on nutrition, textiles, and family. In 1970, Mac formally underwent a name change to the College of Family and Consumer Studies (FACS), and in 1998, FACS joined with the College of Social Science to form the College of Social and Applied Human Sciences. The University of Guelph notes that "Macdonald Institute changed and adapted across the twentieth century. Its programs and purposes parallel the changing place and role of women in twentieth-century post-secondary education."

About the Stamp's Design
The Macdonald Institute stamp is one of an ongoing series of university stamps designed by Denis L'Allier of Montreal. These stamps share several common elements: the school colours, a campus building and the institution's coat-of-arms. Featured on this stamp is a photo of the Macdonald Institute Building by the University of Guelph.