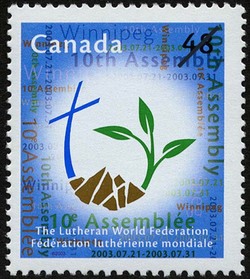 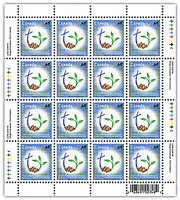 Founded in 1947, the Lutheran World Federation (LWF) is a global communion of Christian churches in the Lutheran tradition. The LWF acts on behalf of its church members in areas of common interest, including ecumenical relations, theology, humanitarian assistance, international affairs and human rights, communication, and mission and development work. Today, the LWF has 136 member churches in 76 countries, representing more than 61.7 million of the world's 65.4 million Lutherans. Every six years, the Lutheran World Federation holds an Assembly that functions as its highest decision-making body. The Lutheran World Federation Tenth Assembly will be held in Winnipeg between July 21 and 31, an event marked by Canada Post with the issue of a single domestic rate ($0.48) stamp. This special commemorative stamp is available to collectors in a pane of 16.

THE TENTH ASSEMBLY
The theme for the Tenth Assembly is 'For the Healing of the World,' inspired by the words in Revelation 22:2 "… and the leaves of the tree are for the healing of the nations." A related logo was designed, displaying a broken landscape set against a cross and an olive branch. The LWF explains that the "cross implies movement. One of the leaves is leaning over the earth, while the others are reaching toward the sky as a sign of creation and healing." The logo was designed by two artists from Regina, Saskatchewan. Erik Norbraten is an art director and graphic artist. Richard Nostbakken is a teacher and works as an independent artist. It is expected that the Assembly, hosted by the Evangelical Lutheran Church in Canada, will have an attendance of more than 442 delegates from LWF member churches, along with representatives from congregations and related agencies, ecumenical guests, journalists, interpreters, volunteers and visitors.

THE EVANGELICAL LUTHERAN CHURCH IN CANADA
The first Lutheran worship service in North America took place in 1619 near Churchill, Manitoba, but it wasn't until the 18th century that the first Lutheran settlement in Canada arose - in Lunenburg, Nova Scotia. The Evangelical Lutheran Church in Canada has its national offices in Winnipeg, and membership is estimated to be approximately 189,000.