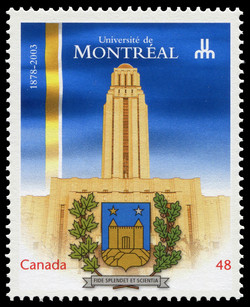 The hidden date for this stamp can be found within the university's emblem. Established in 1878, the Université de Montréal is the second-largest centre for higher education and research in Canada, the largest in Quebec, and one of the largest in North America. And although it works closely with partners in more than 50 countries worldwide, this French-language university remains deeply rooted in the Montreal and Quebec environment. To mark the 125th anniversary of the establishment of Université de Montréal, Canada Post will issue a single domestic rate ($0.48) stamp, available to collectors in a booklet of 8.

HISTORY
After several decades of thwarted efforts and despite numerous requests, Monseigneur Ignace Bourget could not get authorization to establish an independent university in Montreal. Finally, on January 6, 1878, Université de Montréal opened its doors when the city's religious authorities were granted permission to establish a Catholic, French-language institution. Originally created as part of Université Laval, Université de Montréal gained independence in 1919. In 1943, the university opened a new campus, its main building boasting the famous tower designed by architect Ernest Cormier. Université de Montréal became a public, non-denominational institution on September 1, 1967.

UNIVERSITÉ DE MONTRÉAL TODAY
With nearly 270 undergraduate programs, 220 masters programs, 71 doctorate programs and a post-doctoral studies program, Université de Montréal is active in virtually every field of knowledge, offering one of the broadest selections of programs in North America. Currently, more than 50,000 students are enrolled at the university, which has a total of 13 faculties, more than 60 departments and two affiliated schools. Considerable effort is devoted to internationalization of teaching activities, with an increase in student placements in other countries and the addition of guest professors and placements for post-doctoral overseas students. The quality, relevance and broad scope of programs, along with student success, are at the heart of Université de Montréal's mission. Over the past two years, the university has recruited many full-time professors and has upgraded its research infrastructure, thus maintaining its rank among major North American public research universities.

ABOUT THE STAMP DESIGN
Université de Montréal stamp is one in an ongoing series commemorating Canadian universities. Designed by Denis L'Allier of Montreal, the stamps in this series share the common elements of school colours, a campus building, and the institution's coat-of-arms. Featured on this stamp is the Central Pavilion, photographed by Guy Lavigueur.