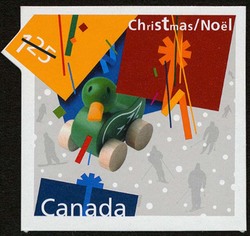 Ancient traditions lie behind the festivities at the end of each December. Our Roman, German and Celtic ancestors prepared festivals of light to mark the winter solstice each year, celebrating the gradually lengthening days and the eventual return of spring. Christianity enriched this festival with the promise of new life and salvation, in the person of the baby Jesus. Here in Canada, Christmas is still a time of hope and joy in the depths of a cold, dark winter.

Many Canadians today celebrate Christmas as a festival of generosity, consistent with the Christian view of the Christ child as a gift from God. The original Christmas gift givers were the Magi, wise men who, according to Christian scripture, travelled far from the east to bring the baby Jesus gifts of gold, frankincense and myrrh. Gift giving is now an intrinsic part of Christmas in Canada. To honour this festive season of generosity, this year Canada Post features favourite gifts in its annual set of three Christmas stamps, one each at the domestic rate (48¢), the USA rate (65¢), and the international rate ($1.25). For the first time, all the stamps will only be available in self-adhesive booklet format.

A wealth of tradition
Canadian Christmas traditions reflect our immigrant roots-they come from many different cultures. From France comes the practice of singing religious carols and setting up nativity scenes in our homes. From Germany we adopted the Christmas tree and learned to make wreaths out of tree branches. From Ireland comes the ancient Gaelic practice of putting lights in our windows, and from England we learned to send holiday greeting cards. By way of the Dutch, the United States sent us Santa Claus, and from Japan we received mandarin oranges as succulent surprises on Christmas morning. However, gift-giving is a tradition we received from various cultures.

The earliest Canadian Christmases were celebrated in New France, where this holy day was a religious occasion and conditions were austere. Nonetheless, gift-giving did occur. The history Relations of the Jesuits, dating from 1660, recounts the story of soldiers honoured with the task of making bread to be used in the Christmas mass. They brought it ceremoniously to the altar during the service, flamboyantly accompanied by flutes and drums, which deeply shocked the bishop of Quebec. But they had given him bread, and he responded with a gift to them-two jars of brandy and a pound of tobacco.

Traditional gift givers
In Quebec and in Acadia, children followed a traditional European custom of placing their shoes by the fireplace on Christmas Eve, so the Christ Child, or Christkindel, could put small gifts in them. Young men and women would visit, distributing gifts, with the Christkindel represented by a young girl in white, crowned with fir boughs and burning candles. This image resembles Saint Lucia, a traditional Christmas figure in Sweden and Norway, whose feast day near the winter solstice has associated her with light and with Jesus, light of the world for Christians.

Shoes at the hearth were eventually replaced by knitted stockings, and by the end of the First World War, Père Noël, or Father Christmas, had become the gift-giver.

In anglophone families, Saint Nicholas traditionally filled the stockings. Nicholas was a third-century bishop well known for his generosity. He is considered the patron saint of young children, and his association with Christmas arose because his feast day falls in early December.

Nicholas was very popular in Europe during the Middle Ages, particularly in France. During the Protestant Reformation, some countries forbade celebrations of his feast day, but the custom was preserved in Holland, and was brought to the new world with Dutch colonists. New Amsterdam became New York in 1664, and the Dutch Sinter Klaas eventually became known to Americans as Santa Claus.

The image of this warm, jovial figure became refined through advertisements and the press over the years, and soon replaced the more severe, moralistic qualities of Nicholas. By the early 20th century, Santa Claus had become well known to children in Canada as well as the United States.

Christmas shopping
From the early days of New France, gifts had most often been exchanged on New Year's Day. Christmas gift-giving didn't become widespread in Canada until late in the 19th century.

Newspaper advertising was largely responsible for the shift. As early as the 1860s, merchants and grocers had begun to decorate their shops for the holidays and entice shoppers with free gifts. In the cities, large department stores began assembling elaborate window displays of toys and gifts. But shopping habits were revolutionized by the introduction of catalogue shopping in the late 19th century. Eaton's, Simpsons and Dupuis Frères brought a wide selection of goods to communities across Canada through their mail-order catalogues, so Christmas shopping could, and did, begin much earlier.

Competition between the large department stores was intense. Santa and his elves had already appeared in many stores, but in 1905 Eaton's staged a promotional coup by organizing Santa's first parade through the streets of Toronto. Similar parades are still held in many cities across Canada to launch the Christmas shopping season each year.

About the stamps' design
The three Christmas stamps were designed by Pierre David of Montreal in his first work for Canada Post. The stamps are irregular in format, and stylishly combine photos of typical Christmas gifts with background images of outdoor winter activities. They vividly portray how Canadians make the dark days of winter joyful during the gift-giving season.

Designed by Pierre David Based on a photograph by François Brunelle Based on a toy by Les Jouets de Bois Richard Émond inc.