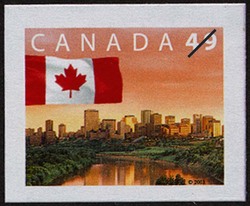 It was known as "the new flag" when it was first raised on Parliament Hill in 1965, replacing the Canadian Red Ensign. Some were initially skeptical of its merits. Its simple design-red stripes framing a red maple leaf on a white background-had been chosen by the selection committee over 2,600 other submissions received, and even Prime Minister Lester Pearson had reportedly favoured a different design. But Parliament had been searching for a distinctive Canadian flag design since 1925, and the country's centennial year was approaching. For nearly a hundred years, Canada had flown either the British Union Jack or the Red Ensign, and neither was an adequately unique emblem for a strong, thriving nation entering its second century. The red and white design incorporated Canada's official colours, was preferred by heraldry experts, and had a powerful simplicity.

In the end, Canadians greeted their new flag with affection, and almost 40 years later, it remains a well-loved national emblem.

With its new domestic rate flag definitive stamp (49¢), Canada Post honours the one hundredth anniversary of the incorporation of the city of Edmonton, Alberta. The red maple leaf flag flies prominently against a view of the Edmonton skyline at dawn, awash in reds and oranges, framed by an image of the North Saskatchewan River Valley. The montage design, by Saskia van Kampen of Gottschalk + Ash, Toronto, evokes the iconography of the Canadian landscape through the picturesque green spaces of Edmonton, which enjoys more parkland per capita than any other city in Canada.