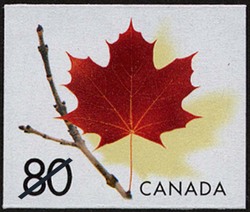 They're the workhorses of the stamp world, pulling their postal weight every day. Definitives may be the stamps that Canadians send and receive the most, but just because they work hard doesn't mean they're not collectible. With a postal rate change in January 2004, Canada Post will issue six new definitive stamps, each portraying a familiar national symbol in fresh new light and colour. Except for the moose stamp the stamps are all in a self-adhesive format.

THE MAPLE LEAF
The maple leaf was an emblem of Canada long before it appeared as the centerpiece of the new flag. In fact, it may have been used to represent this country and its people as early as 1700. The maple leaf of the past was not always red, however, and did not always appear singly, facts which stamp designers have often recalled in their work.

Between 1876 and 1901, all Canadian coins bore images of the maple leaf, and the penny still does today. Its design, which has changed very little since 1937, depicts two leaves on a common twig. Similarly, since 1921, Canada's royal coat of arms have included three maple leaves, but in 1957 their colour was changed from green to red, to conform with the nation's official colours.

Canada Post's new coil domestic rate (49¢) maple leaf definitive stamp is a multi-coloured design created by Joe Gault. Its bright colours suggest power and strength, and a maple key superimposed over the leaf represents rebirth through the circle of life. The stamp's denomination appears planted at the bottom of the leaf, suggesting growth, both in nature and in the nation.

The new USA rate (80¢) and international rate ($1.40) definitive stamps both portray maple leaves, in a common design created by the team of Monique Dufour and Sophie Lafortune. Their approach to the design is simple and contemporary. "By using photography," explains Dufour, "we're updating the symbol of the maple leaf." Pictured against a white background, the maple leaf on its branch appears vividly red in the USA rate stamp, and vibrantly green in the international rate. In both images, the shade of the leaf is slightly blurred, suggesting movement and energy. The aim of their design, says Lafortune, was to portray the maple leaf "in a current way in the context of the new millennium."