Year of the Monkey 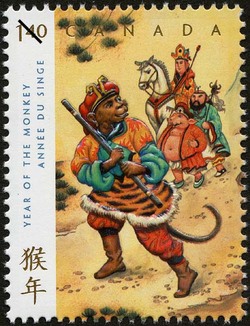 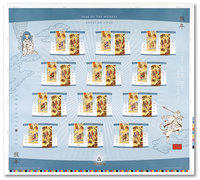 There's something new under the moon. Canada Post's very popular Lunar New Year stamp series celebrates its eighth year with a difference. This year's stamps illustrate a narrative - two scenes from the classic Chinese tale Journey to the West.

"We try to surprise people from year to year, and we don't like to repeat ourselves," says Bill Danard, Design Manager of Stamp Products at Canada Post. "These are the first stamps in the Lunar New Year series with a strong narrative quality, and they also have an element of humour, which is new to the series."

Journey to the West is the fabulous and funny 16th century tale of Sun Wu-k'ung, the Monkey King, a troublemaking trickster who relentlessly defies authority but is redeemed in the end.

Because he is well-known and loved in Asia as a spirited rebel, Canada Post has chosen this clever character to represent the Year of the Monkey in 2004. In Chinese tradition, each year is believed to have the characteristics of one of the 12 animals of the Chinese zodiac. In this year's spirit of simian mischief, one stamp design at the domestic rate (49¢, pane of 25) and one stamp design in a souvenir sheet at the international rate ($1.40) honour the mythical monkey whose antics define the term "monkey business."

Monkey King stamp design a crowning achievement
The stamps tell the Monkey King's story through their design as well as their imagery. "There's a direct relationship between the printing processes and the story we're telling," says Danard. "For example, we've applied clear holographic foil to the monkey's image, because the shifting colour represents so well the monkey's transforming character." Being the attention-seeker he is, Monkey also appears in the foreground of both images, embossed to ensure he stands out.

On the collectible press sheet, Monkey's eventual enlightenment is suggested by a background sunburst design in pearlescent ink. And while images of all 12 zodiac animals appear along the press sheet's border, only Monkey's image is outlined in gold metallic foil, representing enlightenment achieved.

Gold foil was also applied to the stamps to highlight typographic elements and Chinese characters, attracting the eye in a way that gold ink would not. In total, nine colours were used in printing the stamps, including custom shades of red and green to add intensity, and a special shade of beige that matches the background colour of the original watercolour paintings.

The stamps are based on two richly detailed watercolour illustrations by Anita Kunz, which appear in their entirety on the souvenir sheet.

On the domestic rate stamp, Monkey is shown in confrontation with the Jade Emperor, whose throne he has tried to usurp. According to the tale, Monkey was king of an Earthly land, but was determined to join the immortals in heaven. He mastered some supernatural tricks, such as shape-changing and cloud-leaping, before arriving in heaven, where he was made the Jade Emperor's stable-keeper. When he discovered this post was a dubious honour, he destroyed the royal banquet in a rage, eating all the immortal peaches, one of which he still clutches in the stamp image. He then battled the Emperor's soldiers to a draw, and we see him on the stamp in his moment of defiance, declaring himself ruler of the universe. Shortly afterwards, he is chastened by Buddha, who pins him under a mountain for 500 years.

On the international rate stamp, we see Monkey later in the story, travelling west on an errand for Buddha. Released from the mountain by the monk Xuan Zang, Monkey has agreed to travel with him and two animal friends, Sandy and Pigsy, to India where they will retrieve the sutras. The journey is fraught with danger, and metaphorically charts Monkey's progress towards wisdom and the Buddhist state of enlightenment.

Even at stamp size, Monkey's adventures can be read as an allegory of personal growth, a jaunty tale of renewal just right for the Lunar New Year.

About the Illustrator
Illustrator Anita Kunz is a graduate of the Ontario College of Art. She has produced art for book jackets and the covers of many magazines, including Rolling Stone, The New Yorker, Sports Illustrated, Time, Newsweek, and The Atlantic Monthly. She has recently had an exhibition of her work at the Library of Congress.

Designed by Louis Fishauf Based on an illustration by Anita Kunz