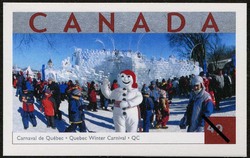 It's a demanding assignment, this year more than ever. Canada Post's annual Tourist Attractions stamp series features another set of fabulous photographs. But this year, there's a difference. "We've chosen several tourist attractions that involve events," says Bill Danard, Design Manager, Stamp Products. "This presents an additional challenge for the photographer-how do you capture an image that represents the event well, when you're faced with huge crowds of people?"

In this fourth year of the series, the stamps retain their distinctive style, thanks to the photographic approach and a consistent design layout. But the series itself also looks a bit different. The number of subjects has been reduced from ten to five, in order to feature each location a bit more prominently. These five stamps will be issued separately at the domestic rate (49¢), each in a booklet of six, and each on a date significant to the location or event.

The first stamp in the 2004 series is being released on January 29, just in time for the opening of the Québec Winter Carnival, which celebrates its 50th anniversary this year. Later this year, the other stamps in the series will be released, featuring the international swimming marathon La Traversée Internationale du Lac St-Jean, the Montréal International Jazz Festival, the Canadian National Exhibition in Toronto, and St. Joseph's Oratory in Montréal. All are celebrating memorable anniversaries this year.

To take an appropriate photograph for the series, the trick is to think small. "Photographers new to this project sometimes find coping with the stamp format quite difficult," says Danard. "It's not always easy to take a beautiful photograph that's also attractive in miniature."

This is where the designers for the series prove their mettle. A photographer may shoot up to a dozen rolls of film at one location, and submit hundreds of photographs. Catharine Bradbury and Karin Uuskikorpi sort through them all, looking for imagery that reads well at a small scale. Danard divulges one strategy: "A 35 mm slide is very close to stamp size, so photos are sometimes examined in slide form."

Capturing the spirit of the Québec Winter Carnival in a single image was particularly difficult. This annual celebration of winter in traditional Québecois style presents many diverse offerings, including night parades, a canoe race across the half-frozen St. Lawrence River, an Ice Palace, a dogsled race through the snowy streets of the old city, and, of course, Bonhomme, the celebrity snowman who is the Carnival's ambassador. The friendly figure of Bonhomme personifies the lively spirit of the Carnival. His fringed belt was worn by 19th century Quebecois from both the bourgeois and habitant classes to tie up their jackets at the waist and keep out the Quebec winter chill.

Nearly one million visitors each year make the Carnival the largest winter festival in the world. It appears to advantage on the stamp, printed in nine colours within a frame banded in metallic silver ink, a shimmering correlative to Québec's winter beauty.

For more information on Bonhomme and the Quebec Winter Carnival, visit www.carnaval.qc.ca/english/plus_traditions.asp.