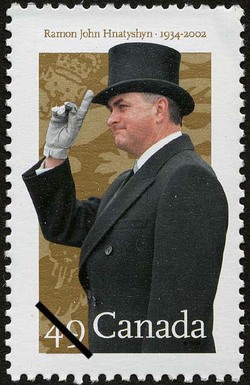 Even in full formal dress, Ray Hnatyshyn could never look pompous. He was resolutely a man of the people, a quality that's conveyed beautifully in a domestic rate (49¢, available in a pane of 16) commemorative stamp issued to honour Canada's 24th Governor General.

The design captures, in an interesting way, both Hnatyshyn's dignity and his joyful, human qualities.

Susan Mavor designed the stamp around a photograph that may be familiar to some Canadians. It was taken on the day Hnatyshyn assumed the office of Governor General by Paul Chiasson and appeared again when the press announced his death in December 2002.

The strong vertical lines of the photograph are enhanced by the stamp's vertical orientation, and by slightly wider borders on its sides. "The cropping is unusual, too," says Alain Leduc, Design Manager, Stamp Design at Canada Post. "Parts of the photograph reach outside the frame, into the margins, emphasizing the sense of movement, and of individuality."

Mavor placed the photograph against a tone-on-tone background depicting part of the heraldic coat of arms created for Hnatyshyn when he became Governor General. It appears in shades of bronze, reflecting the royal traditions of the position. When placed against the deep black of Hnatyshyn's formal coat and top hat, these warm shades recede, and the photograph emerges with definition. "The contrast gives dimension to the image," says Leduc.

The stamp is issued in 2004 on what would have been the 70th birthday of Ramon John Hnatyshyn, lawyer and politician, son of a senator and grandson of Ukrainian immigrants. He served in cabinet under two prime ministers, as energy minister and justice minister, and had returned to the practice of law before he was appointed Governor General in 1990.

Hnatyshyn brought a warm, welcoming touch to the viceregal office. He famously re-opened the grounds of Rideau Hall to the public, inviting Canadians in for concerts, picnics and skating. He supported the arts and education, establishing the annual Governor General's Performing Arts Awards and several other awards and scholarships, including a cup in his name awarded annually to the winners of the Canadian International Dragon Boat Festival. In 1992, he organized what aired on television as "His Excellency's Most Excellent Rock Concert."

In a 1991 speech to the Empire Club, he said, "Virtually each day I have the great honour to experience a deep sense of pride in the excellence of our people and the magnificence of our country." This graceful commemorative stamp shows that his country regards him with equal esteem.

For a biography of Governor General Ramon Hnatyshyn, visit: archive.gg.ca/gg/fgg/bios/01/hnatyshyn_e.asp.

About the designer
Susan Mavor of Metaform in Vancouver has previously designed stamps for Canada Post's Millennium Collection.