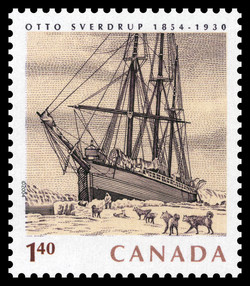 The date for this stamp can be found along the left edge of the stamp. More than a hundred years after it first travelled through the High Arctic ice, the sturdy sailing ship Fram is returning to Canadian shores, this time direct from a Danish printer. It's part of a unique joint stamp issue between Norway, Greenland and Canada, honouring the 150th anniversary of the birth of the Norwegian explorer Otto Sverdrup.

The three stamps in the souvenir set depict a portrait of Sverdrup, the Fram, and a landing boat approaching an Arctic island, possibly in that part of Nunavut now known as the Sverdrup Islands. All are printed in four-colour lithography with one colour gravure, based on images engraved by the Norwegian designer Martin Mörk, whose work is already familiar to Canadians-he created the polar bear engraving for the $2.00 definitive Canada Post issued in 1998.

The Sverdrup joint issue is a complex international production. "There is identical artwork for all three countries," explains Danielle Trottier, Design Manager of Stamp Products at Canada Post. "All the stamps were printed in Denmark by the same printer, with the same design and layout. But each country has chosen to use different stamps, so the souvenir sheets are printed in three different fashions."

Canada Post has issued the stamp portraying the Fram at the international rate ($1.40), so when the souvenir sheet is sold in Canada, the other two stamps appear only as images, without typography or denomination. In Greenland only the landing boat stamp has type and denomination for use in that country, and in Norway, just the Fram stamp and Sverdrup's portrait are denominated.

The same printer, Post Danmark Stamps, has produced for Canada Post a pane of 16 domestic rate (49¢) stamps, using the Fram artwork but with layout and marginal features designed by Canadian Raymond Bellemare.

Bellemare's designs are also featured on three different Official First Day Covers issued in Canada, and he created the cancellation that all three countries will use, with changes to the text for their different languages.

The postal administrations of Norway and Greenland approached Canada Post to join this international tribute. Sverdrup is not well known in Canada, but his travels defined much of our northern geography, at a time when no explorer had yet reached the North Pole. When he began his 1898 expedition on the Fram, he was an experienced Arctic trekker who aimed to explore the northern limits of navigable waters by sailing along the western coast of Greenland and rounding its northern tip. When he found this passage blocked by ice, Sverdrup turned west, and over five years charted a vast area, about 160,000 square kilometres, of islands and ice. The territory he claimed for his country now belongs to Canada, but the Norwegian names remain-Alex Heiberg Island, the Ringnes Islands and others are witness to our shared history.

About the designer
Martin Mörk has also designed and engraved many stamps for Post Greenland. For the Sverdrup stamps, he worked with Morten Stürup, who designed the typography.

Designed and engraved by Martin Mörck.