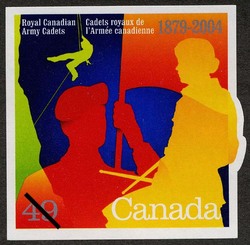 Army cadets earn stars as they master training skills, progressing from green to red, silver to gold.* But some cadets don't stop there. Myriam Bédard first entered a biathlon competition as a cadet, and went on to win two Olympic gold medals for Canada at the 1994 Winter Olympics. Former cadet Chris Hadfield went even further, into the military, then into orbit as an astronaut, reaching for even brighter stars.

The vivid colours of the domestic rate (49¢) stamp issued for the 125th anniversary of the Royal Canadian Army Cadets (RCAC) celebrate the exuberance and high aspirations of youth. "It's a very bold, silhouette-style design, with a clean, modern look that's appropriate for young people," says Danielle Trottier, Design Manager of Stamp Products at Canada Post. "The bright shades of green, red and yellow are a direct reference to the star levels in the cadet training system."

They're also the colours of the changing maple, whose leaf forms part of the cadet insignia and its anniversary logo. While these don't appear on the stamp, cadets may recognize the indirect reference to their motto acer acerpori, "as the maple, so the sapling."

Designed by André Perro of the Toronto firm Smith-Boake Designwerke Inc., the stamp is printed in eight process colours. Crisp white typography accents the brilliant colours, and evokes the precision and discipline under which cadets train.

The cadet program emerged shortly after Confederation, when Canada began building an army to replace British forces, most of which had departed. A new emphasis on training brought about the establishment of drill associations for young men of school age. These first cadets were issued uniforms and equipment so they could acquire military skills, but they were not part of the army.

This is still the case, 125 years later. Cadets still wear uniforms, handle rifles to train for the biathlon or marksmanship competitions, and practice military drills for ceremonial purposes, but the RCAC is essentially a federally-sponsored youth program. Cadets meet regularly for sports, physical fitness, and outdoor adventure training-rappelling, orienteering, trekking, and camping. The focus is on having fun in an environment that fosters leadership and active citizenship, building bright hopes and bold dreams for the future.

* Cadets earn stars as they master certain skills-green for basic skills, red for a model cadet, silver for new leaders, and gold for experienced leaders.