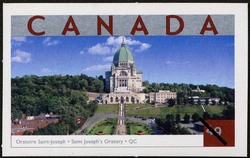 The dome of its enormous basilica is now a familiar presence amid the greenery of Mount Royal, but St. Joseph's Oratory began as a much smaller place. As its name suggests, it was originally constructed in 1904 as a humble chapel, a place for private prayer. But as its popularity grew, so did its size. It now celebrates its 100th anniversary as a well-loved landmark in the city of Montreal.

"The Oratory is a large place, but within this extensive facility there are many smaller, mini-environments, various side chapels for prayer and contemplation," says Bill Danard, Design Manager of Stamp Products. The area of the imposing structure is a massive 8,911 square metres, with a floor space of 13,690 square metres. At 124 metres from base to top, the majestic cross towers above the city of Montreal.

This paradox of small, private spaces in a large, public place is what defines St. Joseph's Oratory, itself a quiet retreat in the midst of busy Montreal. Capturing this essential quality at stamp size was one challenge faced by photographer Bernard Brault.

"Bernard also faced the practical challenge of getting a shot that would show the size of the building, but fit the shape of the stamp," says Danard. "He searched around to find the right vantage point, far enough away to include the whole building, but without any other views of the city."

The result is a photo that conveys the serenity to be found at the Oratory, in the centre of the city but apart from it.

To honour the Oratory's centennial year, Canada Post has issued this stamp at the domestic rate (49¢), the second of five stamps in the 2004 Tourist Attractions series. "We're featuring events as well as tourist sites this year, which gives the series some variety," says Danard.

Brault's photograph is a front view of the Oratory, showing the large flight of steps leading to its entrance. Many visitors have chosen to climb all 283 steps on their knees as a penitential act of devotion.

The Oratory was founded as a place of devotion to St. Joseph by Brother André, Alfred Bessette, a humble and deeply spiritual man who had worked as a porter at nearby Notre-Dame College. In 1904, he built a tiny chapel, 16 feet by 12, where he had often walked on Mount Royal, facing the college. Brother André's piety drew many visitors, including some who believed he could cure illnesses and infirmities. A larger crypt was added in 1917. Brother André did not live to see the completion of the huge basilica, which was finished in 1967, but his Oratory continues to draw the curious and the faithful today, welcoming two million visitors each year.