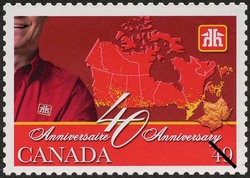 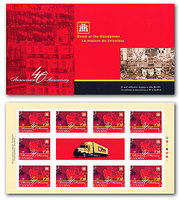 Cities and towns, the places we call home, are built of pride, determination and the coming together of individuals who seek a common goal. They're also built with hammers, nails, drills and saws. We're a nation of builders for whom the local hardware store is more than just a business - it's the cornerstone of the community.

On April 19, 2004, Canada Post will issue a single domestic rate (49¢) stamp to commemorate the 40th anniversary of the founding of Home Hardware.

Interestingly, a designer for the stamp was found close to home - Ron Mugford is the creative director at Home Hardware. A native of Galt, Ontario, Mugford graduated from the Conestoga College of Applied Arts and Technology, Graphic Design and Advertising Program in 1988. He worked closely with the Canada Post design team to create the Home Hardware stamp, his first stamp design.

Home Hardware's pride as a Canadian company is depicted on the stamp through the use of the Canadian map, which displays every Home Hardware location and demonstrates the company's national scope. The partially-shown man on the left symbolizes Home Hardware's nearly 1,000 Dealers and his smile characterizes the type of friendly, helpful service customers can expect. The maple leaf, in vibrant red and yellow, is not only an immediate and clearly Canadian image, but also reflects Home Hardware's corporate colours and acts as a visual bridge between the map above and the reds and yellows at the bottom of the stamp.

The 10-stamp panel is housed within an informative prestige pack, complete with interesting facts and historical photographs, and includes a pane of self-adhesive stickers that are designed to look like wax letter seals. The centre visual of the pane features an image of the immediately recognizable "Yellow Bird", the brilliant yellow transport vehicles that carry products to Home Hardware stores. The bright yellow semi is set against a red background to mirror the vivid colours of the stamp.

As a result of the company's efforts to foster success, pride and common purpose, many Home Hardware Dealers keep their businesses for their entire working lives, often passing their firms down through family - with each new generation of owners strengthening the bonds of friendship and community. This sense of family and community is also reflected in Home Hardware Dealers' good corporate citizenship, evidenced through their generous contributions to both local and national charitable and civic programs.

The company remains the country's only 100% Canadian, dealer-owned and operated major retailer. Home Hardware's corporate headquarters and its largest distribution centre are still located in St. Jacobs, Ontario, where the stamp and the Official First Day Cover will be launched on April 19.

For more information, go to www.homehardware.com.