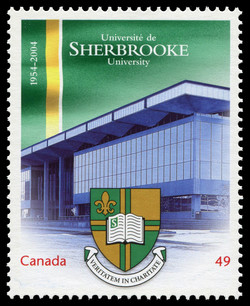 The hidden date for this stamp can be found on the corner of the building. 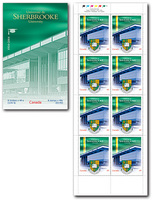 Don't be fooled by the pastoral setting. The University of Sherbrooke is a place of innovation, where bold new teaching methods and programs have developed as the university has grown. For its fiftieth anniversary this year, a commemorative domestic rate (49¢) stamp has been designed to reflect the university's style. "We've chosen an image with a modern look, to show the bias of the university's leadership towards the future," says Danielle Trottier, Design Manager of Stamp Products.

With this stamp, Canada Post's series honouring Canadian universities enters its third year. "Throughout the series, we've featured the main building of each university, because it's often the most easily recognized feature," says Trottier.

In the case of Sherbrooke, it's a revealing choice. The central Pavillion on the main campus was built in a style that remains bold and new, with abundant glass reflecting an openness to ideas and the future. The photograph on which the stamp is based accentuates these qualities, says Trottier: "The way the light hits the building produces an angular, geometric look that's very modern."

Denis L'Allier designed the stamp, based on a photograph by Guy Lavigueur. L'Allier has designed many of the stamps in the series, retaining common elements for consistency, such as each university's heraldic crest and its official colours, here green and gold. The eye-catching green in the Sherbrooke image also reflects the university's pride in the vast green spaces of its main campus.

The university was established in 1954 as part of the Séminaire Saint-Charles-Borromée in Sherbrooke, with a mandate to offer higher education in French. It originally had just three faculties: Arts, Science and Law. By 1960 it had become an independent, secular institution, and today it offers a wide range of undergraduate and post-graduate degree programs, including Medicine and Law, to over 30,000 students each year. It now maintains two locations in Sherbrooke, and a campus in Longueuil, Quebec.

Sherbrooke was the first francophone university and the second in Canada to adopt a cooperative education program, in which students combine classroom lessons with practical experience in the workplace. It was the first university in the world to offer a Masters of Business Administration (M.B.A.) degree in French. Its Faculty of Medicine has developed a unique problem-based learning program to foster independence and compassion among future doctors, a program that has sparked interest among universities around the world.

Amid the green fields of Quebec's Eastern Townships, educational innovations like these continue to lead the University of Sherbrooke into the future.