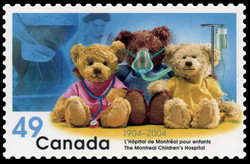 The hidden date for this stamp can be found on the middle bear. The three differently coloured teddy bears that grace The Montreal Children's Hospital stamp do more than just imaginatively symbolize the cultural diversity of the institution's young patients. They also represent the empathetic approach the hospital takes to relieve fears and help sick children better understand and cope with their illnesses.

On May 6, Canada Post will issue this single domestic rate (49¢) stamp to commemorate the 100th anniversary of the founding of The Montreal Children's Hospital. The stamp was designed by Monique Dufour and Sophie Lafortune of Quebec City, whose previous stamp designs include the Circus, the Shriners and the stamps for the Millennium Keepsake.

"The cuddly teddy bears were chosen as the primary visual in the stamp because of the comforting role they play in the lives of sick children," notes Danielle Trottier, Design Manager of Stamp Products at Canada Post. After the three bears, products of Russ Berrie and Company, Inc., were dressed in pastel hospital gowns, photographer Serge Lacroix took the photograph that forms the basis of the stamp. Illustrator Paule Thibault added recognizable hospital equipment, such as a stethoscope, a respirator mask and an intravenous bag to reinforce the bears' roles as patients, and digitally modified the bears' mouths so that they are smiling. In the background, two photos of different eras of care staff come together, highlighting the hospital's centennial year.

Trottier notes that it was essential that" the colours and sizes of the bears differed, to illustrate the importance of multiculturalism and the range of age groups treated at the Montreal Children's Hospital". The Hospital's commitment to providing an equally welcoming environment for all its patients was officially recognized in 1985, when it became the first hospital in Canada to establish a multiculturalism program, and a Multicultural Clinic followed in the mid-nineties. Physicians are skilled at adapting their explanations and treatment to meet different cultural expectations, and the Hospital's Pastoral Care Service offers counselling in all the major religions and maintains a non-denominational chapel.

The Official First Day Cover extends the multicultural approach, using a photograph of children of different races in place of the teddy bears. Through this approach, the stamp and OFDC celebrate not only the hospital's history and longevity, but also the rich ethnical diversity of the community it serves.

The Montreal Children's Hospital, originally the Children's Memorial Hospital, was founded by Dr. Alexander Mackenzie Forbes to meet the needs of Montreal children, many of whom were physically handicapped and without access to medical care. Dr. Forbes, an orthopedic surgeon, worked to raise enough money for a modest hospital that could house from twelve to fifteen children and, as surgeon-in-charge, was devoted to the facility until his death in 1929. The hospital received its first patient on January 30, 1904.

For more information on The Montreal Children's Hospital, visit www.thechildren.com.