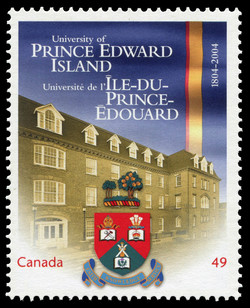 The hidden date for this stamp can be found to the right of the university's emblem. 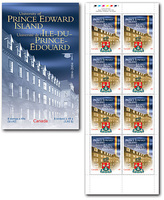 Denis L'Allier, who has designed many of the stamps in the continuing series of commemoratives to honour Canadian institutions of higher learning, believes that the colours and emblem of a college or university are the aspects by which it is most easily recognized. With this as the foundation of his creative approach, the stamps themselves have become miniature emblems of Canada's higher learning institutions.

On May 8, Canada Post will issue a single domestic rate (49¢) stamp to commemorate the 200th anniversary of the University of Prince Edward Island (UPEI).

This stamp is depicted in the school's vibrant colours, which appear to be rippling in an unseen breeze. The dynamic structure of the university's historical Main Building is integrated with the brilliant yellow strip taken from both the school's flag and academic robes.

These separate elements are connected by the addition of the school's crest that appears to float on top of the images, to provide a sense of depth. To continue this emblematic theme, the colours and background image are tapered so that the entire visual is representative of the usual shield-like shape of an emblem.

A tale of two colleges
In1804, Lt. Governor Edmund Fanning and the Legislative Council of the young colony of Prince Edward Island called for the establishment of Kent College. By 1820, the first Kent College building had been erected, but the building was more commonly known as "the National School", or Breading's School (for its first master, James Breading). Later succeeded by Central Academy, which received a Royal Charter in 1834, the Colleges were renamed for the Prince of Wales in honour of the future King Edward VII in 1860.

Meanwhile, another college, St. Andrews, was established under the leadership of Bishop Angus MacEachern. This institution subsequently became St. Dunstan's College, founded in early 1855. In 1969, Prince of Wales and St. Dunstan's were brought together as the University of Prince Edward Island by an Act of the Provincial Legislature.

Over two centuries, UPEI and its predecessor institutions have educated thousands of Prince Edward Islanders and others from around the world. Today, UPEI is described as a "GREAT small university". Its campus, well-known for its historic architecture and its red-brick, well-manicured appearance, is a reflection of the character of UPEI on many levels - a complementary blend of old and new, of tradition and innovation.