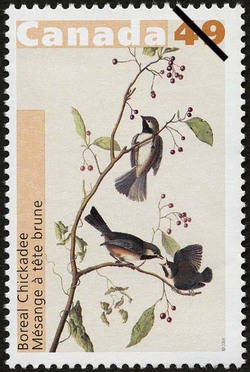 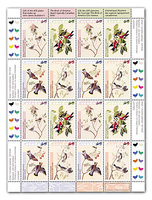 The Birds of America is among the most prized of rare books. The master work of the gifted naturalist and wildlife painter John James Audubon, it was produced in a limited subscription series beginning in 1838. There were only 200 copies in the first print run.

For Canada Post's stamp series featuring Audubon's birds, it was important to reproduce faithfully the delicacy and detail of these beautiful images. "We wanted to keep as close as possible to the originals," says Bill Danard, Design Manager of Stamp Products.

Of course, the images found in those rare printed editions of The Birds of America are not themselves originals. Beginning in 1820, Audubon travelled through Canada and the United States, painting individual portraits, mostly watercolours, of native birds in their habitats. He then arranged for engravings to be made from his portraits. They were printed onto large, double-elephant paper, and individually hand coloured by craftsmen.

"The printed editions didn't lend themselves well to our purposes," says Danard. "The blacks used in the aquatints printed from the engravings darkened the images slightly. When we miniaturized them to stamp size, these blacks intensified - the images became considerably darker, and the colours much less intense."

The solution was to work with Audubon's originals. These priceless treasures are now owned by the New York Historical Society, which purchased them in 1863 from Audubon's widow. "We obtained transparencies of the original watercolours from the Historical Society, along with permission to reproduce them," says Danard.

The results are evident in the clean, bright colours of the stamps produced for the series. "We've produced images that are as close as possible to Audubon's own hand," says Danard.

The focus remained on the artwork as the stamps were designed. "My aim was to establish a discreet typographic framework to support Audubon's fine work," says Rolf Harder, designer for the series. "Colour bars separate the type from the illustrations, creating a maximum of uncluttered space." As design features, these colour bars also provide continuity to the series from year to year.

This year, the second of the three-year series, five new stamps have been released, all featuring birds found in Canada. The four stamps at the domestic rate (49¢) depict the ruby-crowned kinglet (Regulus calendula), the white-winged crossbill (Loxia leucoptera), the Bohemian waxwing (Bombycilla garrulous), and the boreal chickadee (Parus hudsonicus). The U.S. rate stamp (80¢) portrays the Lincoln's sparrow (Melospiza lincolnii).

"One of the challenges of this series is to maintain compatibility among the images, because there is such great diversity in Audubon's artwork," says Danard. "Last year, all the birds appeared with a full landscape background. The birds we selected this year are smaller, and they all appear on sprigs of foliage, so the images have the look of small vignettes. They represent another approach Audubon took to the subject."

Audubon painted the Canadian birds in his collection during two separate journeys north. In 1831, he travelled along the Newfoundland coast before sailing for Europe. He returned in the summer of 1833 to what he called "Labrador": the north shore of the St. Lawrence and the islands of its estuary, coastal Newfoundland and Labrador, and Cape Breton and Nova Scotia.

Audubon's portraits of Canadian birds are considered among his finest. Although he painted only 33 watercolours while visiting this country, 226 of the 435 plates in his collection depict birds typically found in Canada.

Rare printed editions of The Birds of America are held today in four Canadian public collections, in Ottawa, Toronto, Montreal and Fredericton.* This beautiful book is part of Canada's natural and cultural history - an artistic achievement, a valuable record of the nineteenth-century North American wilderness, and an ongoing reminder of the beauty to be found around us every day.

* The Library of Parliament in Ottawa, The McGill University Library in Montreal, the Toronto Public Library, and the Library of the New Brunswick Legislative Assembly in Fredericton.