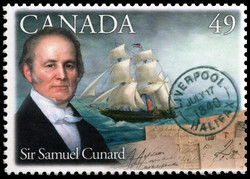 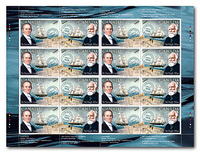 Until the middle of the 19th century, there was no easy way for new Canadians to communicate with family and friends from the old country. The transatlantic mails depended on slow and irregular sailing ships, and post offices were few and far between. For most Canadian immigrants, living on Canadian soil meant being completely cut off from the loved ones they had left behind.

Shipping magnates and business leaders Sir Samuel Cunard and Sir Hugh Allan changed this by introducing transatlantic mail service via their ocean-going steam vessels. In honour of these pioneers, Canada Post will issue a se tenant pair of commerative stamps featuring them on May 28, 2004.

Created by stamp design veterans Dennis Page and Oliver Hill of Page&Wood Creative Strategies in Halifax and veteran illustrator Bonnie Ross, the stamp has been created to not only celebrate the two men, but also the 19th century milestone of fast, regular transatlantic postal service. As such, the design depicts the growing volume of mail that began to cross the Atlantic by steamship at this time. Photographs of actual letters from these trips fill the lower portion of the frame.

Portraits of both Sir Samuel Cunard and Sir Hugh Allan, illustrated in a popular formalized period style, present images of the two shipping magnates in a heroic fashion. Images of the two ships, Cunard's Britannia and Allan's North American, are depicted on route, as they determinedly brave the rough Atlantic seas. The cancellation marks represent the dates of the arrival of Curnard's Britannia in Halifax and the departure of Allan's North American from Liverpool.

According to Design Manager of Stamp Products Danielle Trottier, "these commemoratives not only depict history, but are themselves a piece of history in that they are part of Canada Post's first self-adhesive perforated pane". (For details, see "Honouring Postal History by Making Postal History", page 26)

The men behind the mail
Merchant and shipowner Sir Samuel Cunard was born in Halifax on November 21, 1787. He first partnered with his father in the timber trade, and through his interests in whaling, timber, coal, iron and shipping, he amassed a great personal fortune in the 1830s. In 1825, he co-founded the Halifax Banking Company and in 1839, made a submission to the British government to start regular transatlantic mail service by steamship from Liverpool, England to Halifax, Quebec City and Boston, at a cost of 55,000 pounds a year, for 10 years. The first crossing was made in May 1840, but regular mail service began in July with the Britannia, a paddlewheel steamship which sailed from Liverpool to Halifax and then on to Boston in a total of 14 days and 8 hours.

Sixteen years later, Sir Hugh Allan established a similar transatlantic mail route between Canada and Britain. Allan was a shipping magnate, railway developer and financier, born in Saltcoats, Scotland on September 29, 1810. In 1826, he emigrated to Canada and settled in Montreal where he found a job as a clerk in a commercial goods business. Ten years later, in 1836, backed by family funding, he bought steamships and sailing ships to expand the company's merchant fleet. Allan persuaded the Canadian government to finance the transatlantic lines linking Montreal with Britain through contracts to carry the mail (1853). But when the contract was awarded to Liverpool shipowners McKean, McClary and Lamont, Allan considered them unqualified to handle the work. In 1856 with improved ships, Allan managed to wrest the contract away from his competitors.

Designed by Charles Oliver Hill. Designed by Dennis George Page. Based on an illustration by Bonnie Ross.