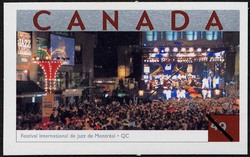 Never mind New Orleans - there's lots of jazz that comes to Montreal every summer. But the joy of the music and the crowds at the Festival International de Jazz de Montréal is difficult to capture in any single image, let alone one at stamp size. "To maintain consistency with the other images in our Tourist Attractions series, we needed a photograph," says Bill Danard, Design Manager of Stamp Products. "But we also wanted an image that would show how people attending the festival really focus on the music."

This wasn't the only challenge faced by photographer Nadia Molinari of Toronto. The main events at the Festival occur outdoors at night, so ensuring adequate light for the photo was important. Molinari approached her subject by shooting from above. At the 2003 festival, she shot from the press gallery, far enough from the main stage to provide a panoramic view of the crowd, but close enough to see the performance. Designer Catherine Bradbury then reviewed her many rolls of film to select the most successful images.

For the domestic rate (49¢) stamp honouring the festival, the Stamp Advisory Committee chose a photograph that is beautifully balanced. "We see the night darkness without losing parts of the image to shadow, and we see the bright stage, but the light doesn't eclipse the other details," says Danard. No significant digital manipulation was required, he adds: "We did some minor colour correction to preserve the balance when the image was reduced to stamp size."

A more intimate view of the scene is featured on the First Day Cover. Here Jean-Francois Leblanc reversed the perspective, shooting the crowd from behind the musicians onstage. "It's a performer's view, and it really captures the attentiveness of the listening crowd," says Danard.

The Festival International de Jazz de Montréal celebrates its twenty-fifth rendition this year. Since 1980, jazz musicians from around the world have converged on Montreal every summer, and many of jazz's most legendary performers have participated. The festival drew 12,000 fans in its first year, and has since grown to become the jazz event of the year. In 2003, it drew over 1.8 million fans, many of them spectators at its popular outdoor concerts.

The Jazz Festival stamp is the third Canada Post has released in this year's Tourist Attractions series. The 2004 series will include five domestic rate stamps, each issued separately to honour a Canadian tourist event. "It's a more flexible format," says Danard. "Now people can purchase just the stamps they want, and use them in Canada to celebrate the event."