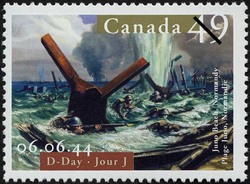 Lest we forget, it has been sixty years since Allied forces stormed the beaches of Normandy. Canadian forces were there on D-Day to begin the liberation of western Europe. "Our intention is to honour the survivors and their fallen colleagues while the events of June 6, 1944 remain within living memory," says Bill Danard, Design Manager of Stamp Products.

Canada Post is issuing a single domestic rate (49¢) commemorative stamp on the sixtieth anniversary of D-Day, to coincide with memorials across the country. It's not the first time the Normandy landings have been remembered philatelically. In 1994, for their fiftieth anniversary, Canada Post issued three stamps commemorating both the D-Day landings and the Normandy campaign that followed under the title The Second World War, 1944, Victory in Sight.

"We have a slightly different focus for this sixtieth anniversary stamp," says Danard. "Our visual imagery for this stamp concentrates on the initial landings and the Juno Beach sectors of the Normandy coastline. We're specifically honouring those Canadian troops who participated in the June 6 operation."

It's significant that the first landings are not represented with a candid, action photograph taken during these pivotal moments. The 1994 stamp features a photograph of a later stage of the D-Day operation, once the beaches had been secured. "Neither the British nor the Canadian governments would allow combat photographers to accompany the troops for the very first stages of the landings," says Danard.

The Normandy coastline was chosen for the Allied landings because it was less heavily fortified than areas such as the Pas de Calais, where the English Channel narrows. After five years of war, the German forces occupying France had created an "Atlantic Wall". The Allied plan for breaching it involved ground forces from Canada, Britain and the United States working together with naval and air support in the largest combined operation in history. The Canadian landing site was code-named Juno Beach. By midday on June 6, 1944, the beachhead had been won, and by nightfall, Canadians had penetrated further inland than any other Allied seaborne forces. But on that single day, there were over a thousand Canadian casualties, including 359 dead.

"With the imagery of this stamp we aimed to capture the experience of the very first Canadian troops to land on Juno Beach that day," says Danard. "We tried to balance a sense of the victory achieved with an acknowledgment of the human price."