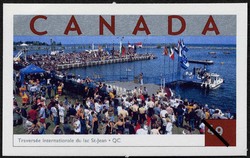 With a surface area of a thousand square kilometres, Quebec's vast Lac St-Jean is no ordinary lake. It's more like an inland sea, wild and unpredictable when the wind kicks up. Nonetheless, about 25 intrepid souls brave its chilly waters every summer for one of the world's most challenging swim marathons, the annual Traversée internationale du Lac St-Jean.

It's a distance of 32 kilometres from the shores of Péribonka across the lake to Roberval. The Quebec swimmer Jacques Amyot was the first to complete this crossing, in 1955. His success launched an annual marathon and festival, which celebrates its 50th crossing this year. Canada Post has issued a domestic rate (49¢) stamp for the occasion, the fourth of five stamps in its Tourist Attractions series for 2004.

"In previous years, the series featured places, but now we're focusing on events," says Bill Danard, Design Manager of Stamp Products. "This year we're releasing each stamp in the series separately, near the time of the event, and at the domestic rate, so people can use these stamps in Canada to celebrate the occasion."

The series retains its familiar design features, including the distinctive colour bars for typography and denomination. But the events featured to date - the Québec Winter Carnival, the Festival International de Jazz de Montréal, and now the Traversée - all involve immense crowds over large areas. "The challenge for the series this year has been to represent such large-scale events well at stamp size," says Danard.

The Traversée is a huge tourist event for the region, drawing about 75,000 visitors every summer to Roberval, a community with only 11,000 permanent residents. The marathon is held on the last Saturday of July each year. Swimmers leave Péribonka at 7 a.m., and the waiting crowds usually spot the race leaders approaching the shores of Roberval by early afternoon.

The current record holders, male and female, completed the crossing in close to six hours,1 during the 2000 event. Every year the world's finest swimmers come to compete, drawn by substantial cash prizes, but most of all by the thrill of participating in an event that has been classed among the six most difficult sporting challenges on earth.2

Throughout the last week of July, Roberval celebrates. Along with fireworks and a parade featuring the swimmers, the highlight of the festival is Supper in the Streets, 3 an outdoor meal for thousands of guests served at an enormous table more than a kilometre long. It's an example of the traditional Quebecois hospitality that welcomes visitors each year during the Traversée's celebration of swimming.