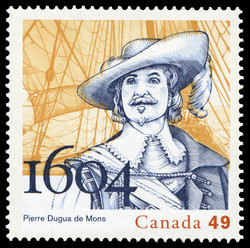 The hidden date for this stamp can be found above de Mons' shoulder along the right edge of the stamp. 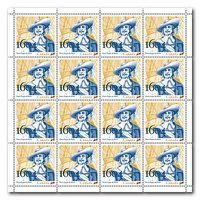 Canada Post will issue this historically significant stamp to commemorate the 400th anniversary of the first French settlement in Acadia at St. Croix Island. Located on the border between Canada and the United States in the state of Maine, the former settlement is now an International Historic Site.

A joint issue with France, the stamp was designed by Réjean Myette of Montreal-based Fugazi and illustrated by Suzanne Duranceau. It features a portrait of nobleman Pierre Dugua, Sieur de Mons, who led the expedition of five ships carrying 120 men.

"My first objective was to design a historical stamp with a contemporary look - a stamp that would, at once, speak of both the past and the present," says Myette. "The choice of character was obvious as Pierre Dugua initiated the colonization. His boat, Le Don de Dieu, was the theatre of this incredible adventure. And the typographical and design decisions are explicitly contemporary, creating a link between yesterday and today."

The stamp is the first in a series planned to celebrate French settlements established between 1604 and 1608, and related explorations. The portrait on the stamp is printed through intaglio, a gravure process. The remainder of the Canada Post-issued stamp is printed in lithography. Stamps issued by La Poste in France will bear the same design, created through the intaglio and lithography processes.

After reaching Canada the group split up, and Dugua and 78 of his men sailed into Passamaquoddy Bay and up the St. Croix River. There they found an island near what appeared to be the confluence of three rivers that resembled the arms of a cross, which led Dugua to name it St. Croix Island. The summer was spent clearing the island to build a kitchen, storehouse, smithy, chapel and a fortified stockade.

Unfortunately, once the long harsh winter set in, the settlers were cut off from the mainland and unable to hunt on the small island. Scurvy overtook the men and by winter's end, nearly half had died. The next summer, the settlement on St. Croix Island was dismantled and the group left the island to settle at Port Royal, as named by Champlain, an area near the Annapolis Basin in Nova Scotia.

Designed by Réjean Myette. Based on an illustration by Suzanne Duranceau. Designed by François Martin.