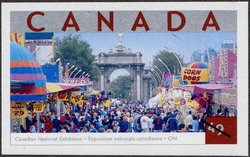 The Princes' Gates marks the entrance to the grounds of Toronto's Canadian National Exhibition (CNE), and is a landmark to generations of fair-goers. It's also appeared on a stamp once before. A graceful silhouette of the Princes' Gates was featured on a 1978 stamp issued by Canada Post to honour the centennial of the CNE.

In a nod to that earlier issue, a new domestic rate (49¢) stamp celebrating the 125th anniversary of the CNE shows a much livelier view, a look at the gates from inside the fairgrounds on a busy afternoon at the Ex. "We wanted to make the link to the previous stamp without duplicating its design," says Bill Danard, Design Manager of Stamp Products at Canada Post. "So this time we aimed to capture the feeling of life and activity during the event."

Photographer Michael Rafelson approached this task by focusing on the main avenue leading from the Princes' Gates, which appears prominently in the background. His photograph shows an immense crowd lining the midway, where booths offering games and food vie for attention on a hot August afternoon. The stamp photo was printed in six colours with two additional colours in the stamp typography, to fully reproduce the range of bright summer hues in Rafelson's photograph.

The new CNE stamp is part of the ongoing Tourist Attractions series, the fifth and final issue for 2004. It retains the series' distinctive colour bar and typography in silver ink. "But it's the photography that makes this series," says Catharine Bradbury, President and Creative Director of Bradbury Design. "We designed it to give maximum size to the photograph, so it will have the greatest possible impact."

A close examination of Rafelson's photograph reveals extraordinary detail, even at stamp size. But it necessarily captures only part of the 190 acres occupied by the exhibition grounds in downtown Toronto.

Widely known as the Ex, the fair first opened on this site in 1879 as the Toronto Industrial Exhibition. Begun as a showcase for innovation in science and industry, it was an immediate success, and became an annual summertime event. Over the years it demonstrated electric light, the electric railway, and sound recording. It was renamed the Canadian National Exhibition in 1912.

The Princes' Gate was built in 1927 and named in honour of a visit that year by the Princes Edward and George. Today, over 1.4 million visitors enjoy the Ex each August. But as they pass through the Princes' Gate, there is a reminder of the fair's proud history overhead - the statue of Winged Victory, guiding Canada into the future.

For more information on the CNE, visit www.theex.com.

Designed by Catharine Bradbury. Based on a photograph by Michael Rafelson.