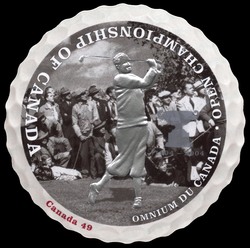 The hidden date for this stamp can be found on one of the boys who are lying on the grass. The image of the golfer is embossed onto the stamp. Pane of 8 with folder

Despite all the hard-hit drives over long green fairways, golf is often a game of inches. Precision is par for the course, so avid players may know that a legal golf ball measures exactly 1.68 inches in diameter (42.67 millimetres).1 To celebrate the 100th anniversary of the Canadian Open golf tournament, Canada Post has issued a pair of circular stamps at actual golf ball size, complete with dimpled edges.

These sizable stamps are eye-catching, for their special effects as well as their dimensions. "The subject warranted special presentation," says Peter Scott, Principal and Creative Director at q30 design inc. in Toronto. "Golf has become a major spectator sport, and the Canadian Open has a huge following. We wanted to show how the game has evolved over the years, while the fundamentals have stayed the same."

The two stamps present this evolution photographically, with contrasting images from an early Canadian Open and a more recent event. Both images show a crowd of onlookers and a player silhouetted in silver, one driving and one putting. A silver trophy appropriate to each era also appears. "We tried to capture the excitement and emotion of the event," says Jeremy Linskill, the q30 designer who worked with Scott on the stamp. "The size of the stamps allowed for detailed images - you can actually see faces in the crowds."

The eight self-adhesive stamps in each pane sit comfortably, like golf balls at rest, amid a photograph of lush green turf. Each stamp pane is enclosed in a portfolio that displays a collage of photographs and detailed statistics about the Canadian Open's one hundred years, culled from the archives of the Royal Canadian Golf Association (RCGA).

The first Canadian amateur golf championship was held in 1895 in Ottawa, to coincide with the RCGA's formation.2 In 1904, in an effort to make the tournament more exciting, it was opened to professionals as well, and a cash prize offered. The first Canadian Open was held that year in Montreal at The Royal Montreal Golf Club, with 36 holes played in a single day. The tournament was later expanded to 72 holes, now played over four days. The 100th Canadian Open will be held in September 2004 at the Glen Abbey Golf Club in Oakville, Ontario.

Just in time for this event, various collectible products will be on display at selected Post Offices across the country. Coasters and playing cards bearing the stamp images will be available, as well as a collectible folder featuring both the stamps and a 10¢ coin, which serves as a ball marker in a divot repair kit. A framed gift set will present the stamps and two collectible coins, with space for a golfer's own photo, so everyone can share the spotlight during the Canadian Open's historic anniversary year.

For more information on the Canadian Open, visit The Royal Canadian Golf Association at rcga.org.

1 The rule regulating the size of golf balls was introduced in 1990 by the Royal and Ancient Golf Club of St. Andrews, Scotland, the governing authority for the rules of the game in more than 100 nations (see www.randa.org). For more detail on ball dimensions, see the Royal Canadian Golf Association's Rules of Golf at www.rcga.org.
2 The Canadian Golf Association received its royal designation in 1896.