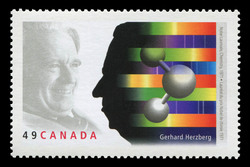 Even if you weren't a flower child, you would most likely still recognize Milton Glaser's 1966 poster of musician Bob Dylan. This well-known portrait shows Dylan's profile in black, with his hair a riot of multi-coloured curls. "It's an image that illustrates perfectly what goes on in the minds of creative people," says Paul Haslip of HM&E Communications.

Haslip designed two new domestic rate (49¢) stamps honouring the groundbreaking scientific work of Canadians Gerhard Herzberg and Michael Smith, both winners of the Nobel Prize for chemistry. While researching photographs for the stamps, the designer ran across a black-and-white profile of Herzberg, and immediately thought of the iconic Dylan image. "As graphic artists, we work with a visual language, and we're always looking for recognizable images that we can use in our own way," says Haslip. "I realized that this kind of image would show the newness and creativity involved in scientific discovery."

"So much of science is intellectual work," agrees Bill Danard, Manager of Stamp Products at Canada Post. "The vivid colours here aptly represent the activity of the mind."

The colours also have specific correlatives in each scientist's field. Herzberg won the Nobel Prize in 1971 for his work in spectroscopy, which analyzes light spectra to reveal molecular structures. The bands of the colour spectrum are represented in his stamp portrait. Smith was a biochemist working in genetics, who won the Nobel Prize in 1993. His portrait shows the double helix of DNA, with the letters that represent the chemical building blocks of the genetic code.

The blacked-out profiles of each scientist were created from photographs suggested by their families, and offer sharp contrast to the bold, bright graphic elements. The stamps were printed in eight colours, with a pearlescent silver ink adding a reflective sheen.

But there's more colour here than first meets the eye. "We wanted to emphasize the unseen qualities of the science, because both men studied phenomena invisible to the naked eye," says Haslip. So Herzberg's spectrum and Smith's genetic letters are both overprinted with blue fluorescent ink, which is invisible in normal light but fluoresces when exposed to ultraviolet light. Blue was chosen to recognize Herzberg's work in the shorter wavelengths of the spectrum, which appear in shades of blue the human eye can't perceive.

Both stamps have regular, four-sided tagging, which fluoresces yellow-green under ultraviolet light. In addition, a special feature also appears in tagging ink. The copyright date is hidden in each stamp, an unseen find for collectors to locate, in the spirit of scientific discovery.