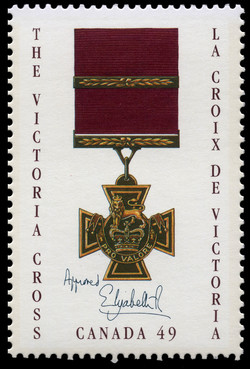 There's a reason it looks bronze. Each Victoria Cross is cast from the bronze of cannons captured from the Russians during the siege of Sebastopol, during the Crimean War. Reproducing the exact colour of the medal was just one of the challenges Pierre-Yves Pelletier faced when designing the stamps commemorating Canadians who have received this distinguished military decoration.

Introduced by Queen Victoria, the Victoria Cross is awarded for conspicuous bravery in the presence of the enemy. The first Canadian recipient was Lieutenant Alexander Roberts Dunn, who fought at Balaklava during the Crimean War, in the battle made famous by Tennyson's poem "The Charge of the Light Brigade." Amid the withdrawal on October 25, 1854, Dunn deliberately turned his horse back and attacked oncoming Russian riders, allowing a fellow soldier to escape.

On the 150th anniversary of that action, Canada Post has issued two domestic rate (49¢) stamps to honour all 94 Canadians who have received the Victoria Cross, the Commonwealth's highest military decoration for bravery.

The stamp, showing an actual medal, is based on photographs provided by the Canadian War Museum. The medal is one of 26 held in the museum's collections, but Canada Post asked that all identifying marks be removed from the photos, so the recipient would remain anonymous even to the stamp's designers. "We didn't want to single out any one -individual as more important than the others," says Bill Danard, Manager of Stamp Products at Canada Post.

Working with the photos, Pelletier undertook the painstaking task of mapping out the stamp's embossing. "I designed all the levels of relief needed to create the die," he says. "After deciding exactly which features to emboss, I did detailed line-work, with separate diagrams identifying each level for every part of the medal."

As for colour and finish, "the medal has no gloss at all, so we used a dry varnish to reproduce this dull effect," Pelletier says.

The second stamp depicts an illustration. In 1993, Queen Elizabeth II approved a Canadian Victoria Cross, similar to the original in every respect save the inscription "Pro valore," a Latin version of "For valour." As no Canadian medal has yet been awarded, none have been created. The stamp reproduces the design approved by the Queen, complete with her signature.

Pelletier also drew the illustration for the unique pane of 16 stamps, over which is printed the names of all 94 Canadian recipients of the Victoria Cross. Special perforating patterns were developed for the sheet to ensure these names were not broken up, an additional mark of respect for these distinguished Canadians.