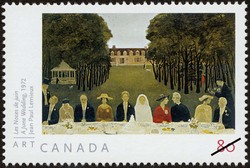 "I am especially interested in conveying the solitude of man and the ever-flowing passage of time. I try to express this silence in which we all move."
Jean Paul Lemieux

His paintings may portray silence, but they speak volumes. Jean Paul Lemieux is one of Canada's most beloved artists, whose work often captures aspects of this country that live in our collective imagination - the vast spaces and deep silences of this land, and the solemnity of our response to it.

It's appropriate, then, that three of Lemieux's paintings have been chosen to re-launch Canada Post's popular Masterpieces of Canadian Art series, which has now been redesigned under the series name Art Canada. Lemieux's 1974 "Self-portrait" appears on the domestic rate (49¢) stamp, his 1972 painting "June Wedding" on the U.S. rate (80¢) stamp, and his 1959 work "Summer" on the international rate ($1.40) stamp.

"The design must serve the painting," says Hélène L'Heureux of Gottschalk+Ash in Montreal, who created the new look for the series. "The biggest challenge was to find the right minimalist approach. I wanted a simple, uncluttered, modern look, because even though we're presenting art from different eras, we're designing a stamp for today."

From this premise, she arrived at a striking asymmetrical design - a simple white frame with wider borders at left and bottom, where typography is clustered. A modern sans-serif font appears lightly, in a rich metallic grey ink, with the denomination a small splash of red. "The effect is to create an interesting typographic bond between these elements, without overwhelming the artwork," says Alain Leduc, Manager of Stamp Design at Canada Post.

When it came to reproducing Lemieux's well-known paintings, colour was a primary concern. "We generally make colour separations from transparencies provided by the gallery or owner," says Leduc. "Then, we check that the colours are accurate by comparing our results with the original. For the Lemieux paintings, I checked the colours twice against the original, correcting each time, to make sure they were as close as possible."

In the case of "June Wedding," however, some of the background details were hardly visible once the image was reduced to stamp size. Certain colours were made brighter to compensate, as a way of retaining the painting's integrity. "The reproduction is so good that under magnification you can see all the tiny details in the background," says Leduc. Close inspection of the stamp reveals a pale moon in the cloudy sky, a woman in the woods wearing a red dress, and a couple walking their dog in front of the manor house.

The integrity of the art is retained in other ways as well. "It's important to see the painting clearly," says L'Heureux, so the stamps are large.

They are also irregular in shape, because she chose not to crop any of the paintings. Each stamp takes the shape of the artwork, which is presented in its entirety.

This decision led to some interesting design problems. "It was difficult to reduce the size of the domestic rate stamp, because the painting is so elongated," says L'Heureux. "But we wanted the dimensions to reflect value, so the U.S. rate stamp had to be larger, and the international rate larger still." She experimented with all the possibilities of scale until she found the right proportions for each stamp.

But that wasn't the only problem raised by their dimensions. "It was a real mathematical challenge to fit the three stamps together on the souvenir sheet," L'Heureux says. "To a certain extent, their final size depended on our ability to make them fit."

Lemieux would no doubt be pleased with the care and attention given the presentation of his paintings at stamp size. A teacher as well as a painter, he lived most of his life in Quebec City, where he was born in 1904. He began painting as a child, studied in Montreal and Paris, and taught for over 25 years at the École des Beaux-Arts de Québec. During his lifetime he received various awards for his work, including the Order of Canada. He died in 1990.

The stamps are being issued in the year Lemieux would have been 100, and their release date coincides with the opening of a retrospective of his work organized for his centennial year. On October 22, 2004, the exhibition opens at the National Gallery of Canada, featuring about 30 landscapes Lemieux painted between 1950 and 1970, and tracing his tremendous influence on landscape art in Canada. * From Ottawa the exhibition will travel to the Musée national des beaux-arts du Québec in Quebec City early in 2005, then on to other Canadian cities. Meanwhile, Canadians across the country can enjoy Lemieux's work in miniature through the "Art Canada" postal gallery.

*For more information on the exhibition, visit the National Gallery of Canada's website at http://www.gallery.ca/en/see/collections/artist.php?iartistid=3221.

Designed by Hélène L'Heureux. Based on a painting by Jean Paul Lemieux.