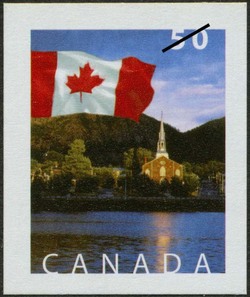 In deep midwinter, it's nice to be reminded that there's a lot more to this country than ice and snow. Canada's colour palette is bright and bold, vast and varied, and it's always changing with the seasons. For the 2005 postal rate change, Canada Post has released vibrant new definitive stamps in three designs that each take their colour cues from nature in all her exuberance.

THE FLAG:
"This stamp design is evolving," says Bill Danard, Manager, Design and Production at Canada Post. "For several years we've used the image of the flag positioned over a background landscape. But now that the design has become familiar, we've made the flag itself a bit smaller, so we can focus more on the landscape."

In a set of new domestic rate (50¢) definitives, Canada's flag still flies from the edge of each stamp on a virtual pole, hovering over the upper left part of the image, but the typography has been updated, and the image is now oriented vertically. And this year, instead of a single landscape, five different images from across the country have been featured. In each, the maple leaf flies over a miniature explosion of colour.

"Our goal was to portray the diversity of Canada," says Danard. "We've represented five different regions, and we looked for a balance between rural and urban locations, using places that hadn't been featured on a stamp recently. The range of bright colours emphasizes this diversity, and provides variety in the booklet."

The result is five distinct images in an eye-catching range of bold colour tones. Seen from one of its harbour islands, Toronto's skyline gleams in the golden-red light of the sunset. The green hills of Mont St-Hilaire, Quebec, frame the spire of the Church of Saint-Hilaire, known for its magnificent interiors painted by Ozias Leduc. Lush greenery surrounds the waters below Shannon Falls along the coastal highway at Squamish, British Columbia. Under a blue prairie sky, the Broadway Bridge spans the South Saskatchewan River in the centre of the city of Saskatoon. And brightly painted homes overlook the sea in the town of Durrell, on South Twillingate Island, Newfoundland.