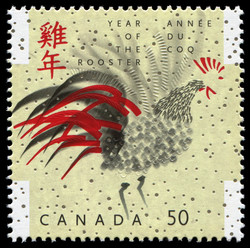 The hidden date for this stamp can be found on the rooster. 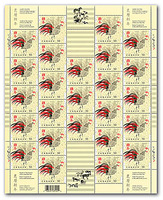 The rooster looks east to greet the sun as it rises, but this year things are a little different. For the Lunar New Year celebrations, Canada Post has created a pair of proud birds that look both east and west. The corporation's two stamps for the Year of the Rooster, one each at the domestic (50¢) and international ($1.45) rates, are designed to pay tribute to the ancient eastern art of brush painting, but with a western technological twist.

"As a designer, I try above all to be honest," says Hélène L'Heureux of Montreal's Gottschalk+Ash International. "It would be a fallacy for me to attempt Chinese brushwork - I could not pretend to create something in an art form that takes decades to master."

Instead, L'Heureux created brushstrokes on the computer in the style of Chinese ink painting. "I wanted to create a design that would re-interpret the genre in a personal and playful way," she says.

For L'Heureux, this approach was a modern gesture of respect for an ancient art form. She was inspired, she says, by contemporary Chinese artists who have explored similar ideas. "I recently saw the work of a Chinese artist whose landscape paintings seemed inspired by Van Gogh. They were strong personal statements, and I was impressed with their authenticity and artistic integrity. I also saw a recent exhibition of the work of Xu Bing, who creates pictograms in Chinese style using the western alphabet. I felt these were both precedents, which gave me the right to re-interpret Chinese art in this new way, as a bridge between the occidental and the oriental, the old and the new."

But working on the computer still meant a painstaking design process. L'Heureux didn't scan photos of Chinese brush strokes - she individually created every stroke, dot and mark, emulating the transparency of ink and its different levels of opacity. "I was drawing with a brush made of pixels," she says.

These computer-generated brush elements were then put together on the screen stroke by stroke, as an artist would put them on paper, to create the shapes of the two roosters.

"With the subtle tonal variations in each brush element, these are very sophisticated images," says Bill Danard, Manager, Design and Production at Canada Post. "Every year we try to do something different with the Lunar New Year stamp series. These images are an interesting contrast to last year's colourful Year of the Monkey stamps, but they're also relevant because they evoke the values and aesthetics of Chinese brushwork, which is an art form at the very heart of the culture."

Taking this delicate design from the small screen to the big presses was the next step. "It wasn't easy to preserve the designer's work in the print environment," says Danard. "We had to replicate the designs at much higher resolution, which required some very creative work from the pre-press house. They found that the most accurate way to reproduce the different ink values in the brush elements - some quite opaque, some more transparent - was to treat them as colour separations. Each digital image was broken into layers according to ink density and texture, and then re-assembled, layer by layer, at higher resolution."

The domestic rate stamp was printed with six ink colours in different shades of grey, to retain the look of an ink painting. To provide a sense of richness, embossing was added for texture, and two colours of foil were applied, in the traditional red and gold of the Lunar New Year. Subtle gold-foil spotting in the stamp's background suggests the ancient practice of using handmade paper made with flecks of gold leaf.

The international rate stamp is available on an individual souvenir sheet or an uncut press sheet of twelve. For the higher stamp value, there's even more richness, with embossing, ten ink colours, and three foils, in red and two shades of gold. The stamps appear within an oval that recalls one of the traditional fan shapes, on a greenish background that resembles raw silk.

This year the souvenir sheet will be available in two versions, one a -collector's edition marking 35 years of diplomatic relations between Canada and China, stamped with the dates and the flags of both countries.

"This relationship is part of what the stamps celebrate," says Danard. "The design links an artistic tradition with the latest technology, -connecting the old with the new, China with Canada. It's been very -satisfying to see these design concepts come to fruition, because -honouring cross-cultural connections is what the Lunar New Year stamp series is all about."