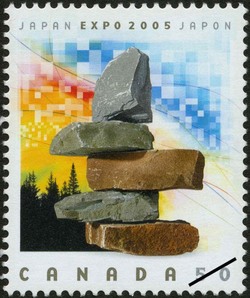 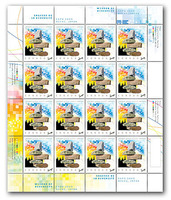 "This was one of those big concepts that designers love, but find scary," says Paul Haslip of HM&E Design. "It was a huge challenge because it was so abstract, and there were very few parameters to limit it. But in the end, we arrived at a very simple idea that gave us a lovely little gem of an image."

Haslip's brief was to design a single, domestic rate (50¢) stamp for Canada's contribution to Expo 2005, an international exhibition that opens on March 25 in Aichi, Japan. The general theme of the exhibition is "Nature's Wisdom," and the Canadian Pavilion will celebrate in particular the "Wisdom of Diversity." "It's a large, inclusive theme, intended to explore the diversity of our land and our people, all the various aspects of Canada," says Alain Leduc, Manager, Design and Production at Canada Post.

From this highly conceptual starting point, Haslip set to work. "My approach to design is often word-oriented," he says. "For this project, I began by thinking about nature, and looking for words to describe what we mean by the wisdom of diversity. I finally realized that it can be expressed symbolically as balance."

Finding a strong visual image to express the idea of balance was Haslip's next challenge. "I spent a day hiking in the woods through Toronto's ravines, collecting leaves, bark, pine cones, and rocks," he says. "I was interested in the Inuit Inukshuk as a human marker that doesn't disturb nature unnecessarily. Then as I picked up rocks, I began noticing their different shapes and colours - their remarkable diversity."

Haslip eventually went into the studio with nothing more than his findings and an intuition. The image that appears on the stamp came together under the lights of photographer Curtis Lantinga. "There was magic there," Haslip says. "As we put together various arrangements of rocks, we saw how the cantilevered effect emphasized the idea of balance, and the stack gave us a lovely organic, almost human shape."

With this image captured on digital film, Haslip enhanced the colours of the rocks to emphasize their diversity, and developed a high-intensity background for the stamp, with pixelated squares that call to mind the importance of technology in Canada. Communications technology will be a central part of the exhibits at Expo's Canadian Pavilion, which will offer innovations such as virtual online visits through its website. But as a reminder that technology must remain in balance with the natural world, the stamp's pixelated squares dissolve into a vibrant colour wash reminiscent of the Northern Lights.

Framed by typography, the image becomes a miniature poster, an invitation to experience Expo, and to consider its ideas about our place in nature.