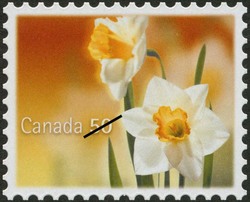 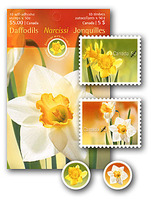 Like many of us, they hibernate through the long winter, and emerge once the snow begins to recede, warming their faces in the sun. Daffodils are the surest sign that spring has finally arrived in Canada. Just as this winter begins to wane, a new pair of domestic rate (50¢) stamps will bloom with cheery images of the genus Narcissus.

Unfortunately for the designer, when it came time to photograph daffodils for these stamps last April, there wasn't a bloom to be found. "I called florists and grocers all over the Montreal region," says Isabelle Toussaint. "But potted daffodils are grown much earlier in the season, and they weren't yet flowering naturally in this area, so no one could sell us any. We actually began looking at fabric reproductions, to see how realistic they would appear. A couple of weeks later, as I was driving home one evening, I saw some daffodils just opening in my neighbour's garden. I called the photographer right away and said, 'I've got some! Can you shoot this week?'"

With her neighbour's permission, Toussaint dug up two varieties of daffodil, complete with bulbs and a good shovelful of earth. "I left the holes in the soil, and after the photo shoot, I just put them back," says Toussaint. Throughout their celebrity moment, the daffodils remained healthy, and returned to the garden to continue blooming.

Marc Montplaisir photographed the flowers against a white backdrop, back-lit to enhance the effect of transparency in their delicate petals. The backgrounds for the stamps were then created by Toussaint, who digitally manipulated the photographs to produce a photo-montage of flowers, with colours intensified for contrast. "I reproduced the same images, but with a blur effect, to give the feeling of many flowers," she says. "Only the primary image is in focus, but the background suggests the daffodil's natural environment."

The two stamp designs will be available in a self-adhesive booklet of 10, with the added feature of 10 floral envelope seals. A souvenir sheet of two gummed and perforated stamps will also be available, displaying the logo of the Pacific Explorer 2005 World Stamp Expo, to be held in April in Sydney, Australia.

Daffodils are not native to Canada, but because they are winter-hardy, they thrive in most parts of the country. Symbols of hope and renewal, they have served as the ideal emblem for the Canadian Cancer Society's spring fundraising campaign for the past half-century. Canada Post's daffodils will be available for this event and for the Easter holiday, cheery reminders that whatever the weather, spring is on the way.