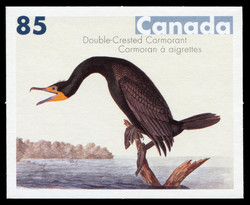 Every year, tiny Piping Plovers migrate thousands of kilometres from Atlantic coastal beaches, as far north as Newfoundland, to tropical climes as distant as the Bahamas and West Indies. Although commonplace during much of the 19th century, studies suggest less than 1,400 pairs exist today. The Piping Plover serves as a gentle reminder of the fragile state of our environment and is one of five shorebirds immortalized in Canada Post's third and final set in a three-year series commemorating wildlife artist and conservationist, John James Audubon.

In addition to the Piping Plover, this set includes the Horned Lark, the Stilt Sandpiper and the Willow Ptarmigan at the domestic rate (50¢), available in a se tenant pane of sixteen gummed stamps, and the gregarious Double-Crested Cormorant at the U.S. rate (85¢) in a booklet of six self-adhesive stamps.

From the outset, the design of the stamps posed a special challenge: it was decided that out of respect for Audubon and to preserve the integrity of the original paintings, only minor adjustments should be made to their original format. This was achieved by developing stamp formats that were as close as possible to the proportions of the originals - which are housed and made generously accessible to Canada Post by the New-York Historical Society.

"Because the originals are wider than they are tall, the images in this final series are horizontal," explains Bill Danard, Manager, Design and Production at Canada Post, adding that the shape of the stamps was adapted so that each bird image occupied the same proportion of the stamp as in previous years.

Another challenge for designer Rolf Harder involved introducing colours that would add a slight, delicate balance between the images and accompanying text. "Most of the bird images in this third series are in neutral tones," says Harder. "My aim was to establish a typographic framework that would discreetly support the fine work of Audubon. The colour bars containing the word 'Canada' on the right, are screened values of the solid colours used for the denominations on the left. At the same time, the colour bars subtly link with the colours in the illustrations, enhancing the images without overpowering them."

When Audubon first began documenting the birds he saw, he likely never expected his works would move from the collections of art aficionados into the halls of scientific study and wildlife conservation. As a pioneering ornithologist and avid hunter, Audubon expressed in his early writings that a day was not really a good one unless one hundred birds had fallen to his gun. Like numerous sportsmen, Audubon gradually developed a conservation conscience. He was one of the first witnesses to sound the alarm, noticing that prairie chickens, wild turkey, and Carolina parakeets, among many other birds, were no longer as numerous as he once knew them to be. Indeed many of the birds he captured on his canvases are dwindling in numbers today, making his work more valued than ever.