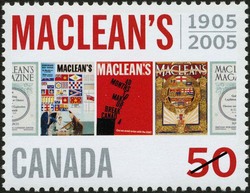 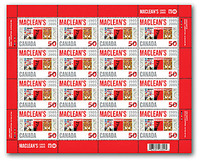 Over the last one hundred years, there's been a constant news source in the lives of Canadians: Maclean's. First launched by John B. Maclean in 1905 as
The Busy Man's Magazine, the publication soon became known as The Business Magazine before taking the name of its founder in 1911. Decades later, there have been different looks, different logos and different ways of presenting the cover image. A cursory scan chronicles when illustration was popular, when photography was more prevalent and when typography hit its stride.

What sort of imagery could distill this national magazine's century-long dialogue with Canadians into a meaningful single stamp? "We could have worked with simple typographic touches, but we realized the covers were such a touchstone," says Donna Braggins, Maclean's Director of Marketing.

Influenced by Maclean's strength of brand, 52 Pick-up, a Toronto design firm, decided to use a series of four different covers and the magazine's dominant red corporate colour to depict the evolution of this information resource.

The bookend split image appearing on the far left and right of the stamp is the March 1911 cover marking the emergence of Maclean's from its predecessor
The Busy Man's Magazine. The second image is the July 9, 1954, cover created by Rex Woods, showing a 1964 calendar hanging on the wall. The image of men debating the flag of Canada anticipates the flag debate of the mid-1960s. The next cover, from November 1962, features the work of Allan Fleming, perhaps best known for his creation of the CN logo. This all-typographic cover was his first freelance commission for Maclean's. J.E.H. Macdonald, of the Group of Seven, created the final full cover (from the left) for the July 1917 Dominion Day issue.

"Basically, we wanted to convey a current look rather than an historic retrospective and to project a sense of continuation," says Susan McIntee, founding partner and creative director of 52 Pick-up. "Silver ink and varnish were added to give the tiny cover images extra pop."

Although this is the agency's first stamp design, 52 Pick-up is no stranger to working in small format. Whenever they tackle a corporate image package, they begin with the business card, "because it's confined and demonstrates how well a design really works," says McIntee, adding, "Maclean's is very grid-like and structured and that's how this stamp evolved, to mirror that same sort of structure." A similarly crisp approach was applied to the design of the Official First Day Cover. Using Maclean's own clean, clear font and a collage of covers, a graphically stunning result was achieved.

Renowned for the voices that have come to it over the years, Maclean's is a destination for people tightly tied to the identity of Canada through writing and the arts, including authors Mordecai Richler, Stephen Leacock and June Callwood, and visual artists A.J. Casson, Alex Colville, Harold Town and Yousuf Karsh. This commemorative release pays homage to the making of a Canadian icon and its profound role within a country and among its people.