Down in the Laurentides, 1882, Homer Watson, RCA 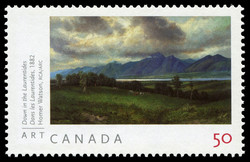 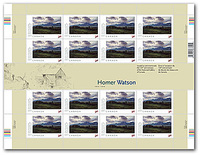 "Laureate-like he is a poet of the trees, and he has loved them, lived with them, learned of them all his life, until from intimacy has grown tremendous power."
Katherine Hale, Canadian Magazine "Interview with Homer Watson"

While few Canadians know the name or recognize the work of Homer Ransford Watson, in his day, he was one of the most prominent artists in Canada. Born in Doon (near Kitchener), Ontario, on January 14, 1855, Watson died there on May 30, 1936. Throughout his career, he was often called the "Canadian Constable" because his style of painting the local countryside was so reminiscent of British artist John Constable.

Growing up in rural Ontario, Watson received an art set at a young age as a gift from his aunt. He was far more interested in drawing the fields around his farm than plowing them. Self-taught but showing raw talent, Watson moved to Toronto at nineteen and started making contacts with other artists. Between 1874 and 1876, while he worked in the studios of photographer William Notman, he met Henri Perré, Lucius O'Brien, and John Arthur Fraser, and spent hours copying paintings in the Toronto Normal School in order to improve his technique. From 1876 to 1877, he visited New York City, where he was influenced by the Hudson River School, and in particular, the work of George Inness.

In 1878, when Watson returned to Doon and began exhibiting his paintings, his ability to capture the drama of nature attracted the attention of many prominent people. In 1882, he was elected to full membership in the Royal Canadian Academy with "Down in the Laurentides," the painting which graces the 50¢ commemorative.

Watson also exhibited at the New Gallery in London and at the Royal Institute in Glasgow and, in Canada, he won five prizes at the Toronto Industrial Exhibition. In 1900, he completed "The Flood Gate," one of his chief works, which appears on the 85¢ U.S. rate stamp. Critic Dennis Reid noted, this work "...is an excellent example of Watson's understanding of weather, nature and man...In this work, he relays a message about the power of the natural world and the determination of the human spirit."

Many of Watson's paintings are inspired by the countryside around Kitchener, and his style demonstrates honesty and authenticity, as well as an emphasis on the moods and forces of nature. Notable collectors in both Canada and Britain, including Queen Victoria, owned his paintings and he left a lasting legacy through his efforts in founding the Toronto-based Canadian Art Club to promote the work of Canadian artists.

"Down in the Laurentides", 1882 National Gallery of Canada, Ottawa, Ontario