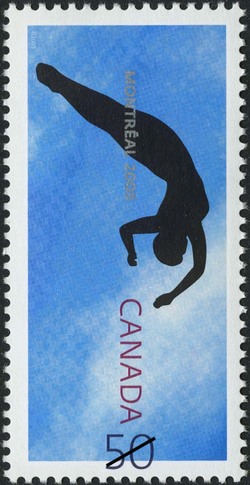 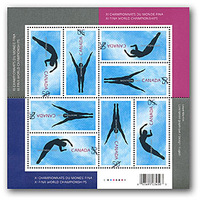 Eight graceful figures glide across the stamp pane, bodies stretching and arching against a brilliant sea-blue background. But take a closer look at these eight stamps. Just how many different designs are there?

Canada Post is issuing two domestic rate (50¢) stamps to celebrate the FINA World Championships being held this summer in Montréal. These two stamp designs have been artfully assembled into a pane of eight that visually multiplies them through a trick of geometry.

"Each stamp is exactly twice as long as it is wide, so two placed together make a perfect square," says Alain Leduc, Manager of Stamp Design and Production at Canada Post. "For the pane, we positioned four of these squares four different ways to make a larger square of eight."

Thanks to centrally placed typography, both stamps can be oriented either vertically or horizontally. The silhouetted figures represent a swimmer doing the butterfly stroke and a diver spinning in mid-air, but when viewed from different angles, they may call to mind other strokes and sports. On the stamp pane, the overall effect is of graceful, fluid motion. "It mimics the sense of freedom you feel in the water," says Leduc.

The designers aimed for just such an effect, says Réjean Myette of Montréal's Fugazi. "We wanted to convey a strong sense of movement, while also showing the elegance of these water sports, how beautiful they are to watch."

The deep black silhouettes were printed with a dense dull black ink to ensure opacity. They provide a sharp contrast to the bright background of dappled blue, pixellated to suggest light dancing on water. "Our goal was to capture the sparkling effect of light on water," says Myette. This approach was inspired by the dots, like water droplets, that appear in the logo of the Montréal event.

These effects were intensified with a special varnish applied over the inks. A dull black ink over the silhouettes gives them a finish that deepens their rich black shade. A glossy spot varnish in the blue background reflects these watery shades and accentuates their mottled quality. But these extra finishes presented some technical challenges. For example, to achieve the desired high-gloss finish, the shiny varnish had to be applied twice, the second pass through the press a full day after the first, to allow adequate drying time.

Inks and varnishes are now dry, but the swimmers are just getting wet, as Montréal welcomes competitors from around the world for the FINA World Championships. From July 17 to 31, athletes compete in five different sports - swimming, diving, water polo, synchronized swimming and open water swimming. It's the largest athletic event Montréal has hosted since the 1976 Olympic Games, and it promises to be a festival of summer sport.