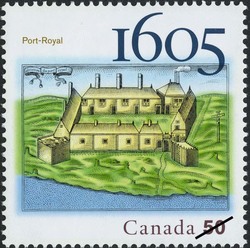 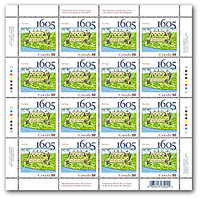 There's no need to imagine what the 1605 settlement at Port-Royal may have looked like. The French settlers who survived the disastrous winter of 1604 on St. Croix Island relocated to this beautiful spot on the Annapolis River in Nova Scotia, where they built a far more -successful community. One of them took the time to draw a detailed plan of the settlement in his journal. This drawing proved an ideal starting point for the design of a new stamp depicting Port-Royal. After all, it had been created by a skilled cartographer of some renown, a fellow by the name of Samuel de Champlain.

Canada Post has issued this domestic rate (50¢) stamp to mark the 400th anniversary of the founding of Port-Royal. It's the second in a series dedicated to French settlement in North America, and is consistent in design with last year's stamp recognizing St. Croix Island.

Although the designers of the new 1605 stamp began with Champlain's drawing, they didn't remain entirely in the past. "We had an engraving created from the drawing to represent, in an old style, the historic -importance of the site," says Réjean Myette of the Montréal design firm Fugazi. "But we also wanted to bring the image into the present, to show how past and present are integrated. So we placed the engraving over a background of bright, modern colour for a more lively, -contemporary look."

The engraving was created by illustrator Martin Côté, and is quite faithful to Champlain's original.* The drawing was simplified in places, but many small details remain and are visible even at stamp size. Note, for example, the microscopic inscription in Old French in the upper left corner. This level of precision was possible thanks to intaglio printing, an old technique appropriate for this historic image.

But it was not without technical challenges. "Registration is difficult to maintain when printing two techniques on two different presses," says Alain Leduc, Manager of Stamp Design and Production at Canada Post. "Once colours are printed through a lithographic process, a second pass through the intaglio press applies the engraved image in black. But on these presses, the paper often shifts during the second pass, resulting in misalignment between litho inks and intaglio inks."

The solution was simple and quite modern. Background colours were printed in an imprecise, watercolour style that doesn't depend on alignment with the engraved image. "The colours appear almost out of focus, with yellows melting into greens," says Leduc. "This avoids drawing attention to any misregistration. Even if there's some play on the press, the overall image still works quite well."

It's a virtue styled of necessity, an approach that our resourceful forebears at Port-Royal would no doubt have approved.

* The original drawing as published in Champlain's journals in 1613 can be viewed on the Library and Archives Canada website at http://www.collectionscanada.ca/obj/h27/f1/nlc003352-v6.jpg.

Champlain's drawing was also a source for the 1939 reconstruction of Port-Royal. It is now a national historic site, where visitors are invited to see how early French settlers lived. For more information, see the Parks Canada website at http://www.pc.gc.ca/lhn-nhs/ns/portroyal/natcul/index_E.asp.