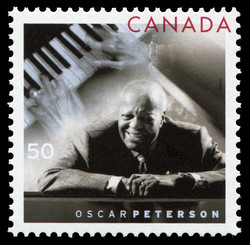 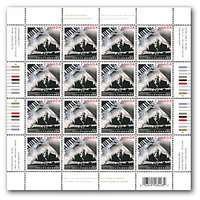 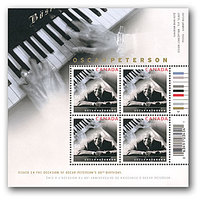 Oscar Emmanuel Peterson was born and raised in the St. Henri district of Montréal. The fourth of five children of an immigrant couple from the West Indies, Peterson first learned music in the family home. Peterson's father, a self-taught musician who worked as a porter on the Canadian Pacific Railway, taught his children all he could about music and encouraged them to continue in the field.

Peterson began to study piano and trumpet when he was five years old, but tuberculosis weakened his lungs and ended his trumpet playing. Devoting all of his efforts to piano, Peterson was taught first by Louis Hooper, a Canadian jazz musician who had worked in Harlem in the 1920s. His next teacher was Paul de Marky, a Hungarian who had been a student of Franz Liszt. De Marky, an accomplished classical pianist, taught the young Oscar Peterson "technique and speedy fingers."

In high school, Peterson practiced on a baby grand piano and played in a band called the Montreal High School Victory Serenaders. At 14, he won a CBC national amateur contest and soon was giving performances on a Montréal weekly radio show, "Fifteen Minutes' Piano Rambling" and on the CBC's The Happy Gang.

From 1943 to 1947, Peterson was the featured soloist (and first black member) with the Johnny Holmes Orchestra, a Montréal dance band. When a noted American promoter heard Peterson play in 1949, he was so impressed that he arranged for the young Canadian pianist to perform later that year at Carnegie Hall in a jazz concert.

Oscar Peterson formed his first trio with guitarist Barney Kessel and Ray Brown on bass. Herb Ellis later replaced Kessel in the trio which toured and won fame in the 1950s.

In 1960, Peterson and three other musicians formed the Advanced School of Contemporary Music, in Toronto. But after a few years, career demands forced Oscar to withdraw from the venture. In 1964, Peterson produced his best-known work, "Canadiana Suite," in which a different region of Canada inspired each of the album's tracks.

Over the years, Peterson recorded or performed with such greats as Dizzy Gillespie, Charlie Parker, Louis Armstrong, Duke Ellington and Nat King Cole. He also played with Count Basie on a few two-piano performances. In all, he has recorded close to 200 albums.

As well as numerous awards, Peterson was made Companion of the Order of Canada, was awarded the Glenn Gould Prize and the UNESCO International Music Prize. In 2003, he was honoured by the Austrian Government with a special stamp. He has been the recipient of -honorary degrees from more than a dozen -universities, and was Chancellor of York University from 1991 to 1994.

On August 15, 2005, the jazz great who has graced the world's leading stages will grace a Canadian stamp commemorating his outstanding achievements.

Look for the Oscar Peterson -commemo-rative stamp design and image in the next issue of Details, on our website or in Post Offices starting August 15, 2005. To order a pane, souvenir sheet or OFDC, see the stamp specifications below for product numbers and price information.