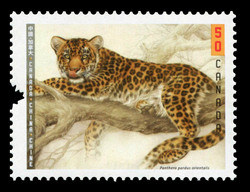 The hidden date for this stamp can be found on the tree branch. 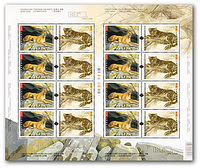 Ghost walker, swamp devil, night crier, catamount: people have given the North American cougar many colourful names, reflecting our fascination with these sleek and powerful cats. And while the spectacular Amur leopard isn't nearly as well known to Canadians as the cougar, the two great felines make perfect companions in a new commemorative stamp issue created jointly by Canada and China.

The occasion is the 35th anniversary of Canada's establishment of formal diplomatic ties with the People's Republic of China (P.R.C.). This breakthrough represented a thaw in the previously chilly relationship between China and the West, a chill that had persisted since Mao Tse-tung's Communist Party founded the P.R.C. in 1949.

The thaw didn't happen overnight, but was the culmination of 15 years of quiet diplomacy. As far back as 1955, Canada had been pressing for China's admission to the UN, on the principle that such an important nation should not be excluded from the world community. A wheat deal in 1960 further strengthened the relationship between the two countries, and finally, in 1970, Canada formally recognized the Communist regime as China's sole legal government.

Each country will release two stamps on October 13, with the Canadian version comprising a se-tenant pane of 16 domestic rate (50¢) stamps, with half portraying the cougar (Puma concolor) and half the Amur leopard (Panthera pardus orientalis). A miniature souvenir sheet of four stamps will also be available. The Chinese issue is a bit different from the Canadian, being made up of two eight-stamp panes, one pane for each big cat.

Canada's issue will also feature the line drawings of the joint flags that appeared on the Lunar New Year Year of the Rooster stamp issued earlier this year. Of further interest to collectors will be the perforations, one of which, in the vertical boundary between the stamps, will be in the shape of a maple leaf. This use of a cut-out shape within the perforation is a first for Canada Post.

"The most interesting aspect of this issue," says Danielle Trottier, Manager of Stamp Design and Production at Canada Post, "is that it's a joint design, with the leopard stamp created by Chinese artist Liu Jibiao, and the cougar stamp by a Canadian, Keith Martin. Also, this is the second joint stamp issue that China has done with Canada - the first was the Norman Bethune stamp, in March 1990. China has never done two joint issues with any country until now."

Keith Martin, the Canadian designer, found himself imagining the cat's daily routines while he designed the stamp. "The result is my image of the cougar at rest outside its den, sunning itself, relaxed and confident - it knows it's at the top of the food chain," he explains.

The overall design of the issue brought its own challenges, says Martin. "Even though the images are representational, both animals were created in contrasting styles that are steeped in the artistic traditions of each country. The visual alliteration in the animals' postures, along with their angled positions within their surroundings, were important to pairing the images successfully."

With the natural grace and beauty of these great cats so vividly depicted by the artists, and because of the uniqueness of this joint issue, there's no doubt that the Puma concolor and Panthera pardus orientalis stamps will be prized by collectors in both countries.

For more information on the Chinese counterpart of this joint issue, see http://www.chinapost.gov.cn.