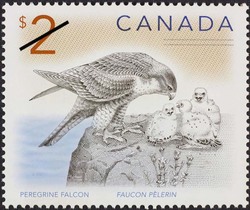 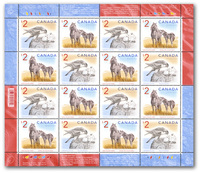 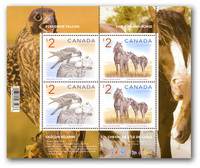 Framed on the wall of Jorge Peral's office is a large drawing of a horse, a beautiful piece Peral created for pleasure in 1991. Imagine his delight, then, when he was asked to engrave an image of Sable Island horses for one of Canada Post's new $2 definitive stamps.

Now Vice-President of Design at Canadian Bank Note Company, Limited, Peral studied graphic design before specializing in engraving, and he brings an artist's sensibility to his work. He steel engraved all four high value definitives issued by Canada Post this fall as part of its ongoing wildlife series. The new $2 definitives feature Sable Island horses and a peregrine falcon.

Engraving, Peral explains, developed centuries ago with jewellers who inscribed designs onto precious metals, then inked the cuts to increase the design's visibility. Eventually, presses were developed to imprint ink from inscribed metal onto paper. With steel engraving, paper is actually pressed into the inscribed lines to create relief. "Intaglio was one of the first techniques used for security printing, and it's still one of the best," Peral says. "This is partly due to the tactility that results from steel engraving, but it's also because the very finest lines and detail can be reproduced precisely. The engraver's technique becomes a security feature."

Peral's technique is evident in the Sable Island horses, crafted entirely of finely calibrated lines, some tightly cross-hatched, some loosely flowing. "I didn't outline the shapes, for soft edges, and I used both thick and thin lines in the manes for texture," he explains. "The sense of volume comes from lines moving over the horses' bodies, revealing more and less light, to create a three-dimensional effect. Heavier lines are cut deeper - they hold more ink, so they appear darker. Finer lines are shallow - they hold less ink, so they look lighter. Working this way, you actually gain another tone with the same colour of ink."

As he engraved the horse image, Peral looked forward to beginning the peregrine falcon. "It's a more detailed image that I'll have to create feather by feather," he says.

The two stamps are printed on both intaglio and offset presses, with background colours in lithography. For the falcon, the ochre sky appears overcast, a subtle contrast to the grey sea glimpsed behind the bird's rocky perch, a detail included to ground the image. This cool palette provides colour tones distinct from other stamps in the series.

Both $2 definitives are being released in conjunction with coins issued by the Royal Canadian Mint bearing similar images. The new stamps replace the $2 polar bear definitive issued in 1998, which remains available until existing stocks are depleted.

Illustrated and engraved by Jorge Peral.