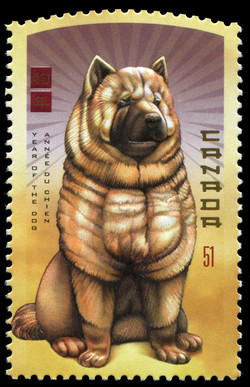 The hidden date for this stamp can be found on the dog's tail. What year will it be on January 29, 2006? That's not a trick question - if your answer was "the Year of the Dog," you're right. According to the traditional Chinese calendar, this year's Lunar New Year begins on January 29 and, like every Chinese year, it's named for one of the 12 animal signs of the Chinese zodiac.

Each year is said to have the traits of its particular animal sign, and people's characters are influenced by the signs under which they're born. For the Year of the Dog, some of those character traits are loyalty, protectiveness, a strong moral sense, and a deep commitment to the welfare of family and friends.

The beginning of every Lunar New Year is a major occasion for ethnic Chinese around the world, because it marks the start of the year's most important festival. To recognize the event, Canada Post is issuing a Year of the Dog commemorative on January 6, 2006, allowing plenty of time to purchase the stamp for gift-giving and mailing Lunar New Year greetings. The tenth in the popular and long-running Lunar New Year series, consists of a single domestic rate (51¢) stamp and an international rate ($1.49) souvenir sheet, and will be of special interest to collectors both for its visual symbolism and for the richness of its production values.

"The premise of the design," says Joe Gault, the issue's designer, "was the dog as a symbol of protection. That led to the idea of the dog as a gatekeeper, and this is why the dogs in both the stamp and souvenir sheet are placed in arched temple gateways. Protection of the home and family is also a very important part of the dog's symbolic meaning, and to reflect this, the souvenir sheet portrays a pup along with its father and mother."

Both stamp and souvenir sheet are enriched with two metallic foils and extensive embossing. "Tilting the stamp makes the foil glisten like glass or water," " says Gault, "and that adds a precious quality that makes them highly collectible."

Alain Leduc, Manager of Stamp Design and Production at Canada Post, is also confident that the stamp will appeal to collectors. "The intricate, multi-level embossing of the dogs is just part of that appeal," says Leduc. "Other subtle details are everywhere, especially on the souvenir sheet. There's the foil that outlines the temple gates, and at the top corners of the stamp itself there are two special, pointed perforations that symbolize a protecting fence. In the centre, the Chinese characters for the Year of the Dog appear on two embossed red tablets, which are covered with transparent foil to simulate the gloss of Chinese lacquer. And the temple in the background seems to appear through a mist or cloud, as if it were a gate to heaven hanging in the sky."

So, at the end of a cold Canadian January, it's comforting to know that a new calendar is beginning with a celebration of loyalty, security, friends and family. That's something everyone can appreciate. Happy Year of the Dog!

Designed by Joseph Gault. Based on an illustration by Suzanne Duranceau.