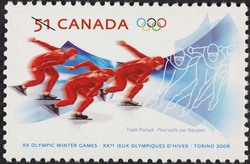 Your breath catches in exhilaration and for a brief moment the roar of the cheering crowd is muted as you crush a gloved finger down on your camera button. In that split second, your camera has captured the image of fire on ice - the Olympic Winter Games.

This is the story told in these two stamps, the result of a collaborative conceptual effort by Susan Mavor and Scot Geib of Metaform Communication Design, a design studio based in Vancouver, British Columbia.

"The painted portions of the illustrations are intended to convey the intensity, or fire, of the sport, and include the deep colours of red and blue. The slight blurring of the images is the result of the athletes' tremendous speed, as if we are looking at a spectator's photograph," explains Mavor, Metaform's principal designer. "Surrounding the athletes, we chose blues, silvery greys and whites to heighten the icy feel."

These domestic rate (51¢) stamps, honouring the upcoming 2006 Olympic Winter Games in Turin, Italy, are "totally different from anything else we've done before," says Alain Leduc, Manager of Stamp Design and Production at Canada Post. In particular, he points to the sleek line drawings, which explore a more analytical side of the action and provide the viewer with further insight into the movement of each sport.

On the skeleton stamp, the first line drawing shows the athlete, or "pilot," pushing the flexible sled with its steel runners down the track, in what is known as the "thrust" phase. In the second drawing, the athlete is "loading" into position, readying to plunge headfirst at a speed that can hit 130 kilometres an hour. Marking its recent comeback in popularity, the sport of skeleton returned as a full medal Olympic sport at the 2002 Salt Lake City Winter Games.

Another fresh entrant, team pursuit speed skating will make its debut at the 2006 Games. The general strategy for this sport is for one skater to serve as a windbreak, with the two trailing skaters conserving energy by staying close behind the leader. The skaters take turns leading, which demands meticulous timing and concentration. Highlighting this exceptional team effort, the team pursuit speed skating stamp depicts all three skaters in line drawings.

In addition to the unique line drawings, Leduc notes how both stamps have dynamic shapes in the background, which emulate the curve of the skeleton run or speed skating oval. These shapes are featured in a reflected composition from one stamp to the other, rather than as identical, to further enhance the movement and graphic tension.

Beyond the technique of the sport, is the spirit of the Olympics - the story of a nation, an athlete, a spectator. "I remember the first Olympics I ever watched. It was the Winter Olympics in 1976, in Austria. It struck me as exotic and beautiful; seeing the passion of the athletes against the icy environment of winter, I was immediately captivated," says Mavor. "It's my hope that these stamps tell a similar story."

For more information about the 2006 games, visit www.olympic.org/turin-2006-winter-olympics.