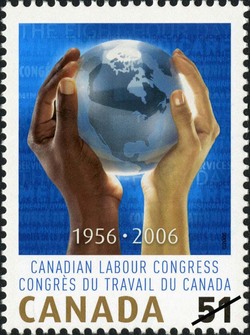 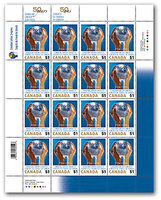 Medicare, Canada Pension Plan and safety laws. While these terms may be widely recognized today, they weren't even on the radar a few decades ago. During an existence that has spanned 50 years, the Canadian Labour Congress has been instrumental in influencing these and numerous other programs to help protect the rights, livelihoods and health of Canadians.

On April 20, the Congress will officially celebrate its 50-year anniversary - a special occasion Canada Post will mark by issuing a single domestic rate (51¢) commemorative stamp.

Stamp designer Steven Spazuk collaborated with photographer Marc Montplaisir to create an image that would capture the essence of the organization, including its accomplishments, mandate and vision for the future.

"After looking at a number of concepts, we decided to go with a depiction of the Canadian Labour Congress logo - only with a twist," explains Spazuk. "It's really a photographic interpretation of the logo. The image shows two hands holding a crystal ball that contains a silhouette of North America. One hand is masculine, the other feminine, one white and the other black."

The background is an important part of the design as well. "We wanted to tell a compelling story that would highlight 50 years' worth of accomplishments," explains Liz Wong, Manager of Stamp Design and Production at Canada Post. "If you look closely at the background, you'll see it's a tapestry that lists (in English and French) many of the benefits that unionized and non-unionized Canadian workers have received over the past 50 years. Thanks to Mr. Spazuk's brilliant design work, the image succeeds in capturing the organization's past, present and future."

In the future, the Canadian Labour congress will expand its membership among building trades unions, teamsters, teachers and nurses. Through collaborative efforts with these and other organizations, the Congress will continue to be a valuable and prevalent force in society for the next 50 years and beyond.

For more information about the Canadian Labour Congress, visit www.canadianlabour.ca.