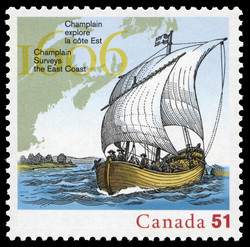 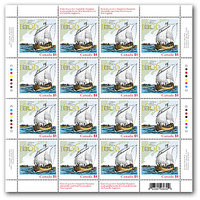 If you'd encountered Samuel de Champlain in 1606, he'd have been the fellow with a quill in his hand. The great explorer was actually a cartographer by trade, and accompanied the first French settlers in North America not as expedition leader but in order to map the new territories. His early maps and drawings of eastern North America were remarkably accurate, and his copious journals record detailed drawings of local flora and fauna.* Unfortunately, Champlain made no effort to record his own likeness.

This problem was the starting point for the design of a new stamp - a joint issue with the United States - that features Champlain's 1606 exploration of the east coast of North America. A special attribute of this joint issue is that the OFDC and souvenir sheet feature both the Canadian domestic rate (51¢) stamp and the American domestic rate (39¢) stamp.

The stamp is the third in a series honouring 400 years of French settlement on this continent, which will culminate in a 2008 issue celebrating the founding of Québec City.

"There are no reliable portraits of Champlain, so we decided to show instead the type of vessel he used during the 1606 expedition," says Alain Leduc, Manager of Stamp Design and Production at Canada Post. "This involved some reconstructive history."

The stamp depicts a barque, a small, two-masted sailing ship built by the French to explore coastal waters too shallow for their larger ocean vessels. It is in fact a reconstruction by Montréal historian and illustrator Francis Back, who re-imagined the barque based on historical information in Champlain's journals and records, such as supply lists. He produced a detailed sketch, which was then reproduced as a line drawing suitable for intaglio printing by illustrator Martin Côté, who also illustrated last year's Port-Royal stamp.

The new stamp, like others in the series, is the work of the Montréal design firm Fugazi. "Throughout this series, we've tried to bring together the best of old and new, combining historical and contemporary design -techniques," says designer Réjean Myette. "In this stamp there's a play of bright and dull colours, and we've placed a traditional, engraved image of the boat against a contemporary map of the New England coast."

Champlain charted this coast from Nova Scotia's Port-Royal south to Cape Cod during the fall of 1606. It was a harrowing voyage that encountered shipwrecks, skirmishes, scurvy and deteriorating weather. Champlain never returned to this coast, but his maps broke ground for later adventurers.

Given the journey's historical importance to both Canada and the United States, the stamp is a joint issue, one of only a few since 1959, when our two countries first collaborated on the St. Lawrence Seaway stamp.

In fact, this year's Champlain stamp is the second joint issue in the French Settlements in North America series, which began with a joint issue with France in 2004. Last year's Port-Royal stamp, the second in the series, is still available through the National Philatelic Centre.

* More about Samuel de Champlain is available online at http://epe.lac-bac.gc.ca/100/206/301/lac-bac/explorers/www.collectionscanada.gc.ca/explorers/kids/h3-1410-e.html.