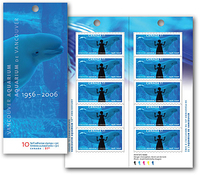 As a frequent visitor to the Vancouver Aquarium Marine Science Centre during the 20 years he's lived in the area, designer Kevin van der Leek was thrilled to be chosen to design a single domestic rate (51¢) stamp commemorating the Aquarium's 50th anniversary.

"We have a family membership at the Aquarium and take the children there often," says van der Leek. "I was delighted to be given an opportunity to capture the aquarium's unique character for something as special as a commemorative stamp."

While working on his initial design approaches, van der Leek recalled these many visits, remembering the Aquarium's sights, sounds and unique atmosphere, as he tried to decide how best to depict it on something as small as a postage stamp. He thought of the times he and his family had strolled on walkways around the Wild Coast Habitat, enjoying close encounters with dolphins, seals, sea lions, otters and other animals; and had seen scuba divers swimming among schools of herring and salmon in the Weyerhaeuser Pacific Canada Pavilion. He also remembered their visits to the Arctic Canada Gallery where they'd been entranced by the graceful antics of four beluga whales, watching them first from the surface and then underwater through giant picture windows.

"The Aquarium is teeming with flora and fauna," says van der Leek. "I decided that the ideal image for the stamp should be one that depicts the perfect -juxtaposition of man and marine nature."

Kevin van der Leek captured his ideal combination in a simple design that delivers a very natural image of what you might see if you visited the Aquarium on any day of the year: a child pressed up against the glass spellbound by the awesome majesty of a beluga whale. The wonder of nature and the awe of children, as Alain Leduc, Manager of Stamp Design and Production at Canada Post, describes it.

The stamp is composed of a photographic image, taken by Canadian photographer Grant Faint. The design brings together three of the Aquarium's important features: education, which has been a -priority of the aquarium since it first opened in 1956, the more than 30 million people who've visited the aquarium in the past 50 years, and beluga whales.

"Beluga whales were a deliberate choice for this stamp because the Vancouver Aquarium is an acknowledged expert in these mammals and their mascot is Bee Bop Beluga," says Leduc. "The whales seem to capture the imagination of children. Looking at this stamp brings out the kid in us all."