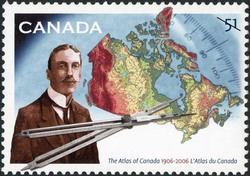 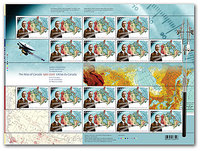 In today's world of satellites, global positioning devices and maps that provide miniscule detail about virtually every square inch of our world, it's hard to comprehend a time when an atlas of the world - let alone an atlas of Canada - didn't exist. And yet, that time wasn't so very long ago. On June 30, 2006, Canada Post will issue a single domestic rate (51¢) stamp to commemorate the 100th anniversary of the first Atlas of Canada.

When James White, Canada's Chief Geographer, created the first edition of the Atlas of Canada one hundred years ago, it was a landmark in our country's history. The Atlas was a compendium of relief maps, and information about the country's geology, canals, lighthouses, railways, -rainfall, snowfall, population densities, mineral deposits, forest resources, telegraph and telephone lines, mountain heights and ocean depths, and more. In its day, the Atlas was innovative and well reflected this country's pioneering spirit because, at that time, no country except Finland had ever issued such a publication. White had 6,000 copies of the first -edition of the Atlas printed.

"Canada Post felt it was appropriate to celebrate this unique piece of our history with a commemorative stamp," says Liz Wong, Manager of Stamp Design and Production at Canada Post. "Before creating the Atlas, James White first published a standard base map of Canada and then a 50-sheet set of topographical maps of well-settled areas. He followed this with the Atlas - an invaluable publication that reflects not only the physical geography of our country, but also its incredible social, environmental and -economic diversity."

Designed by Karen Smith of Trivium Design Inc. in Halifax, the stamp depicts a likeness of James White, a modern map of Canada and a set of proportional dividers. Ivan Murphy provided the stamp's illustration with photography from Robert Young.

"We felt that James White was an appropriate choice given his contribution to the creation of the Atlas," explains Smith. "We decided to use a sepia image of White, to give a sense of how he would have been depicted a hundred years ago, and placed him beside a modern map of Canada."

This combination of the old and the new is a -feature that runs throughout the design, with original map-making instruments featured on the stamp itself and a satellite on the pane. The desire to unite old and new was also behind the decision to mingle photographic elements and illustration into the design.

"When James White published his Atlas, it was printed in eight colours, which was a first for 1906," says Wong. "We wanted to acknowledge White's innovative approach by printing this commemorative stamp in a similar number of colours."

To find out more about the Atlas of Canada, check out the Natural Resources Canada website at http://www.nrcan.gc.ca/earth-sciences/geography/atlas-canada.