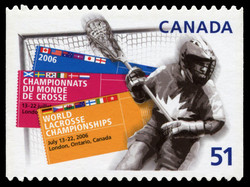 The hidden date for this stamp can be found on the blue ticket. 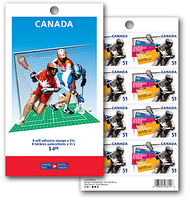 From its early beginnings as the "Creator's Game" to the overwhelming popularity of the modern-day game, lacrosse has survived the test of time and, in 1994, was declared by Parliament to be Canada's official national summer sport.

When Europeans were first introduced to lacrosse in Canada in the 17th century, the First Nations had been playing the game for around five hundred years. The Aboriginal peoples considered the sport a gift from the Creator and called it the "Creator's Game." They saw playing it as an act of thanksgiving. The game was known by the Mohawk as Tewaarathon and by the Ojibway as Baggataway, but Jesuit missionaries thought the stick used to play the sport resembled a bishop's crozier and named the game Lacrosse.

The origins of the modern game can be traced to the Iroquois version of lacrosse, which was played by natives who settled in the Caughnawaga and St. Regis reserves near Montréal after the American Revolution. By 1844, English and French settlers in the area were arranging competitions with the Iroquois.

Today, lacrosse remains an integral part of native culture and is enjoying a resurgence of interest both in Canada and internationally. Between July 13 and July 22, 2006, more than 20 field lacrosse teams from around the world will gather in London, Ontario, for the 2006 World Lacrosse Championships. To mark this historic event, on July 6, 2006, Canada Post will issue a domestic rate (51¢) stamp.

Designed by Tom Yakobina and illustrated by Yvan Meunier, the stamp features a high-energy illustration of a lacrosse player in dynamic stance against a background of international event tickets. An image of nets, placed behind the tickets, offers a sense of dimensionality.

"I wanted the stamp design to be suggestive of a poster advertising the Championships," explains Yakobina. "The player is blurred slightly to deliver a feeling of movement, and he holds his stick high as he charges across a background comprised of tickets to the event. Small flags at the top of each ticket represent countries participating in the Championships."

The illustration of the lacrosse player was inspired by a photograph that Yakobina found on the cover of an old book called Lacrosse: Technique and Tradition. The book's author, Robert Scott, was a leading lacrosse coach in North America and taught at Johns Hopkins University. The book's cover photograph, which was by Robert Rothgaber of Baltimore, shows three lacrosse players in scrimmage, and this grouping has been reproduced by illustrator Yvan Meunier on the Official First Day Cover.

"Lacrosse has a long and illustrious history in Canada," says Alain Leduc, Manager of Stamp Design and Production at Canada Post. "The World Lacrosse Championships take place only once every four years, and this year's event has the largest number of nations registered to participate ever. We feel this stamp is a fitting tribute to the Championships and the sport - and to all the people involved in it."

For more information about the World Lacrosse Championships, please visit www.lacrosse2006.com. Further information about lacrosse can be found at http://www.canadahistory.com/sections/culture/sports/lacrosse.htm.

Designed by Tom Yakobina. Based on an illustration by Yvan Meunier.