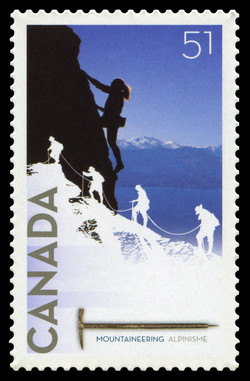 The hidden date for this stamp can be found on the pickaxe. 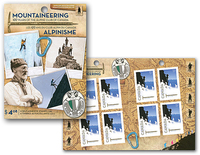 Since its birth in 1906, the Alpine Club of Canada (ACC) has been the country's recognized national mountaineering organization. A volunteer body with more than 10,000 members, the club promotes alpine recreation activities, and supports Canadians in their pursuit of mountaineering through training and infrastructure.

To honour the exciting and popular sport of mountaineering in Canada and mark the 100-year anniversary of the founding of the ACC, Canada Post will issue a commemorative domestic rate (51¢) stamp on July 19, 2006.

Mountaineering's early roots can be traced to mid-19th century Europe. During this time, two notable climbs took place - in 1854 when Alfred Wills climbed Switzerland's Wetterhorn, and in 1864 when teams lead by Edward Whymper and Rev. Charles Hudson climbed the Matterhorn.

As the practice of mountaineering grew in popularity, enthusiasts in Europe began to look for new and exciting challenges beyond the continent's borders. The search for these more distant and challenging summits came at the same time that the Canadian Rockies were becoming better known and accessible. The Canadian Pacific Railway, which was completed in 1885, played a pivotal role in opening up the West. By the early 1900s, Canada had a growing reputation as a mountaineering destination.

At about the same time, land surveyor Arthur Oliver Wheeler began working on a photo-topographical survey of the Selkirk Mountains. He also met Charles Fay, President of the Appalachian Mountain Club, who was in the process of organizing the American Alpine Club. Wheeler had a similar vision for Canada.

Although Wheeler's idea was met with indifference initially, attitudes eventually changed, thanks in part to the efforts of Winnipeg Free Press staffer Elizabeth Parker. Parker's articles, which highlighted the importance of establishing a national club in Canada, caught the attention of some prominent and influential people. With the backing and support they needed, Parker and Wheeler were able to organize the Alpine Club of Canada's founding meeting in Winnipeg, Manitoba, in 1906.

According to Irani, "The challenge of designing the stamp and additional materials was to capture mountaineering's rich history while paying tribute to the modern-day sport."

The strong vertical format of the stamp symbolizes climbing, while the large white space creates a snow or alpine feel. The two distinct sections depict the early climbs in the 1900s and today's mountaineering culture.

"Mountaineering is about pushing the limits, so it's only fitting that Canada Post is 'pushing the limits' as well," says Danielle Trottier, Manager of Stamp Design and Production at Canada Post, referring to the unique placement of the stamp on the OFDC. "The stamp is tipped to symbolize the slope of a mountain side, making this issue the first ever to show a conventional stamp on an angle."

With its photos, old topographical survey map and ACC badge, the OFDC looks remarkably like a scrapbook that captures the old and new, and invites us to explore the emerging faces of climbing.